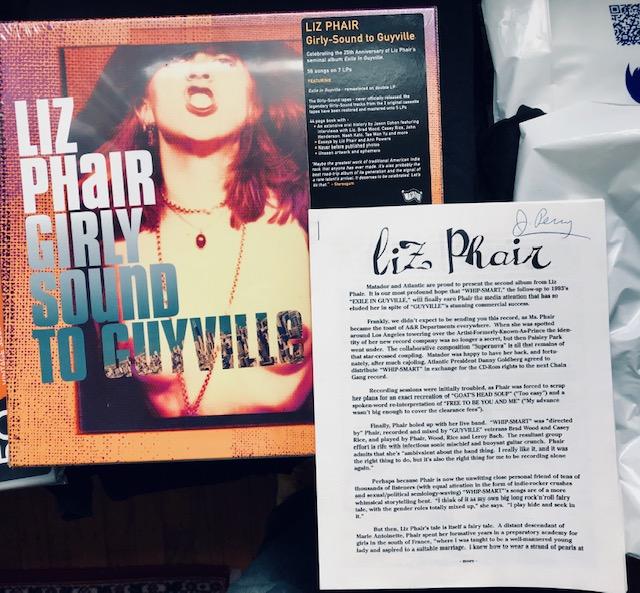 With a Saturday girls’ day out involving my wife and eight-year-old daughter hitting the mega-mall and re-fueling with a leisurely lunch, I’m left to my own devices. Which, naturally, means listening to as much music as I can as loudly as I can, and diving in to “Girly-Sound To Guyville,” a mammoth, seven-LP beauty of a box set that compiles, for the first time, all of the “Girlie Sound” cassette tapes that onetime Chicago indie-rock darling Liz Phair privately released before landing a record deal with the venerable Matador label and making her watershed album, “Exile In Guyville.”

The package also includes a reissue of the ’93 album proper and a cool photo booklet (yes, for those who care, the infamous, uncensored photo booth shots are there) and interview essay, which I have yet to read. I’d been meaning to track down this time capsule since it was released nearly two years ago, but never quite got around to it amid an array of dramatic life changes: the encroaching frailty of an aged parent and the sudden death of a younger one; a new job and focus of responsibility; and the daunting prospect of uprooting and and moving our lives to a new state after two-plus decades nesting in a comfortable habitat.

Anyway, coincidentally, last night, while putting my growing laundry landfill of clothes away, I found myself procrastinating over a nearby storage bin of my first reviews and stories for the likes of Raygun, Request, and Exit, the latter a small, irregularly published New York City-based mag I wrote my first music columns for in the early-90s (I remember my heart bursting the day I saw a stack of issues on the counter at Generation Records on Thompson Street). 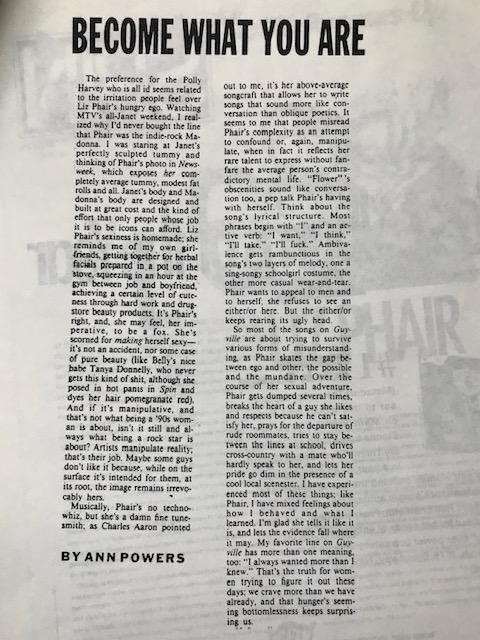 There in the neatly stacked pile of Kinko’s xeroxed clips, faxed story pitches, snail mailed rejection letters, and a kind word of encouragement from Rolling Stone senior yoda David Fricke (one of my favorite writers, any genre — hey, I got his autograph!), I came across a small stash of vintage press kits from a glorious, and increasingly long-ago, indie-rock past.

Included among the Afghan Whigs, Mecca Normal, Butthole Surfers, and Kustomized kits was an extra-thick, saved specimen promoting “Whip-Smart,” Liz Phair’s 1995 follow-up to “Guyville,” her genre-defining ’93 rookie masterstroke (an opus that triggered outsized expectations that Liz would never –or could never — quite live up to over the next couple of decades, despite a run of records that would include commercial success and critical backlashes, inevitable accusations of “selling out,’ and hopeful flashes of the old precocious magic.) As of this writing, Phair has a new album and a memoir entitled “Horror Stories” on the way.

The press kit, which kicked off with a cheeky attempt at grandiose self-deprecation (sounds oxymoronic, I know), was essentially a clip compilation of  the pre-internet press — there wasn’t a single ‘www’ to be found anywhere — Liz had received for “Guyville” from the usual bigwigs of the day like Rolling Stone, Spin, The L.A. Times, Billboard, and the Village Voice (where she’d topped the 1993 Pazz & Jop critics’ poll, beating out Nirvana’s “In Utero,” PJ Harvey’s “Rid of Me,” Dr. Dre’s “The Chronic,” and Pearl Jam’s “Vs.,” among others for Album of The Year). 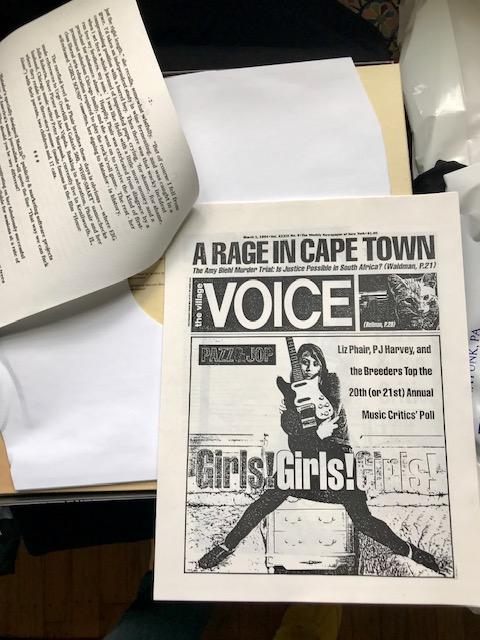 Thumbing through the grainy testimonials, my fingers had felt the paper’s freshly minted, still sharp edges. The press kit had been well-preserved in its airtight, tupperware-like bin (no glossy photo of Liz, though; most likely it had been handed over to the photo department — by me? — and then mysteriously, somewhere along the line, went AWOL).

Along with the others, I had saved this little press morsel for historical posterity; possibly with an eye toward a future gaze many years hence, like last night’s. The reviews and next-big-thing pronouncements I perused felt fresh, lively, like a fun, back-to-the-future time warp.

As I turned the pages, a vaguely unsettling ache crept in and took hold. It wasn’t the amber glow of a sentimental longing for yesterday (yesterdecade?), exactly. And I’d only had two beers, so it wasn’t that. But something struck me, like the poignancy of watching a fading sunlight as it quietly slips beneath the horizon.

Then the feeling came into focus. These brightly written pieces were, in some cases, published in long defunct fanzines, alt-weeklies, and magazines, penned by writers who either went on to greater things or, just as likely, dropped from sight when their restless 20s waned and their 30s pleaded for a modicum of financial or domestic stability.

Which brought home the obvious occasion of this lovely box containing Phair’s epochal album — as well as those youthfully spunky, much-mythologized “Girlie Sound Tapes” that prefigured it — with a knife-sharp clarity: It’s been a life-altering twenty five-plus years since we were all twenty five (or thereabouts), an age when most of us don’t have much of a helpful clue about how life-altering or defining the next twenty five years are going to be. 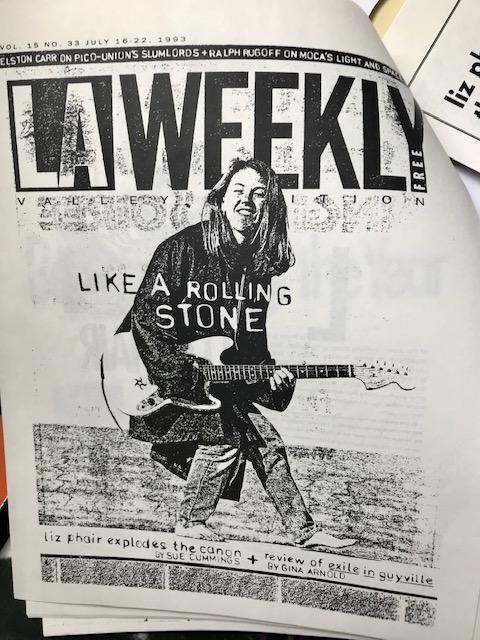 Listening now in my living room to “Guyville”‘s road-trip worthy songs about navigating relationship roadmaps and mustering up a measure of awkward self-determination, I’m struck anew by this smart-alecky, sweetly self-assured underdog of an album that in ’93 came out of nowhere, and hit me everywhere.

Although not as current a soundtrack to my life these days as it was all those hazy summers ago when the sounds blasted free from the stereo speakers on my apartment roof, I do pull out my cherished original LP from time to time, or occasionally ask our portable music know-it-all to play a few tracks while I’m making my daughter dinner. In essence, “Guyville” remains as bracingly original, as guilelessly charming to me as it was back when “6’1” and “Fuck and Run” cranked loudly from my rickety Ford Escort’s tape player as I sped to work and braced for what the day would bring. 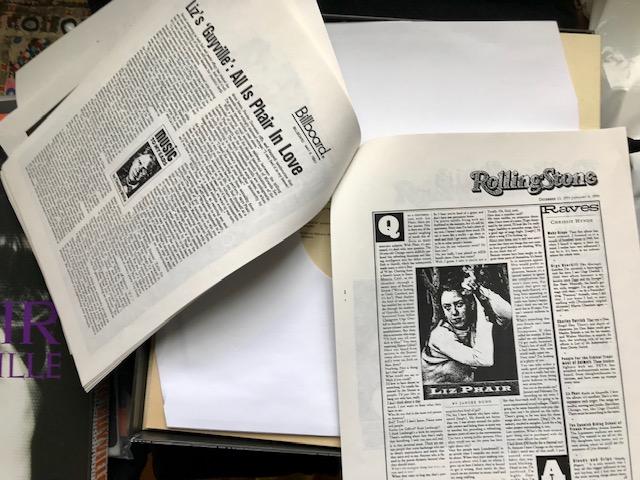 Back then, I had no real idea about what to expect in an uncertain, possibly fraught future. But “Guyville” was chief among a few totemic records at the time — most notably Guided By Voices’ “Bee Thousand”; Luna’s “Bewitched”; Matthew Sweet’s “Girlfriend”; and Pavement’s “Crooked Rain, Crooked Rain” — that acted as a balm, an escape, a spark, a party, a release, an inspiring (and inspired) work that emboldened me to take a shot and try to figure it out. Whatever “it” happened to be.

Two-and-a-half decades later, this brazen, vital music still resonates and speaks, but this time through a filter of our own accrued experiences — i.e. everything that life throws at us when we’re not expecting it — as much as Phair’s own unflinching document of her youthful trials and triumphs. Sure, there’s a wistful bit of nostalgia in the mix too.

Besides the qualities and possibilities the album originally offered back in 1993 (and still does, to a large degree), these days, “Guyville” sounds like a precious connection: a musical map of memory leading back to where I’ve been, where I was going, how I got there, and wound up here. Now more than ever perhaps, “Guyville”‘s fraught, familiar landscape of emotional peaks and valleys has become a time and a place to treasure.

← Welcome To The Breakfast Show: 50 Years of Living With Let It Bleed
FROM SCUD MOUNTAINS TO CHAPPAQUIDICK SKYLINES: The Geography Of Joe Pernice + Hick Rock With The Lonesome Bros →