THE KING IS DEAD (But Johnny B. Goode Lives On): Chuck Berry, Rock ‘n’ Roll’s Pioneer Architect of Youthful Abandon, Dies at 90.

Chuck Berry, the man who first envisioned and then brought about the birth and mythical promise of rock ‘n’ roll, died Saturday at his home outside St. Louis, Missouri. He was 90 years old. His bushels of blueprint songs, and the Big Bang hybrid form he pioneered fusing blues, R&B, C&W, and shrewdly intuitive pop aimed at a commercially untapped generation of baby boomers coming of age in the 1950s, live on as they always have — and always will.

Last autumn, when Berry announced he was getting ready to release his first album in four decades this year, titled simply “Chuck” and composed of mostly new, original songs, the news sounded  almost too time-travel fantastical to be true; like a carnival barker’s clarion call to step right up and see the soundtrack to a thousand sock hops, the architect of rock ‘n’ roll, the amazing ageless duck-walking legend leap to life!

But then, Chuck Berry was a time-traveling marvel in his own right, duck-walking across the decades right through his 80s. And his songs had always transported generations of kids (and many adults too) — bound by suburbs or surrounded by skyscrapers – to faraway places and dreamy destinations, usually by a fast car with a footloose boy or girl at their side.

I can’t really add to this piece I wrote at “RPM” in October upon hearing the news of a Chuck Berry record in 2017. It got me thinking (and not for the first time) about how his name was, and continues to be, indelibly synonymous with so much that I love about the musical universe he brought me to, through the array of planetary admirers and stars ultimately in his orbit, most notably the early Beatles and Rolling Stones, both of whom worshiped him.

I’ve decided to leave the present tenses alone in the original piece because, after all, the music he made will keep Chuck Berry with us forever. Sixty-plus years after his first hits, Berry’s songs remain rooted in the here and now, preserved for eternity in their youthful abandon, and fully alive in the present tense.

“If you tried to give rock ‘n’ roll another name, you might call it Chuck Berry.” — John Lennon

JOHNNY B. GOODE. CAROL. SWEET LITTLE SIXTEEN. NADINE. NO PARTICULAR PLACE TO GO. ROLL OVER BEETHOVEN. ROCK AND ROLL MUSIC. MAYBELLENE. MEMPHIS, TENNESSEE. AROUND AND AROUND. BEAUTIFUL DELILAH. COME ON. REELIN’ AND ROCKIN’. TALKIN’ ABOUT YOU. LITTLE QUEENIE. Et cetera, et cetera. He wrote ’em all, and more.

The great (and not late) Chuck Berry turned a magnificent 90 last week, and announced that his first new album in four decades, titled “Chuck,” would be out next year on the Nashville-based Dualtone Records. All of which sounds about right. Chuck Berry and his music have always been with us, first on our jukeboxes and sock hops and bandstands (he’s still on the latter), and now on our shiny, soooo not-worthy CDs, computer screen streaming services, and all manner of newfangled electronic thingamajigs.

He’s cropped up on movie soundtracks and documentaries — actually, he’s been the star and subject of movies and documentaries — and been the marquee headliner at lifetime achievement award ceremonies. At this juncture, we wonder if the 90-and-still-working Chuck might be testing whether he can even outlive and outlast his laureled legacy. That will be impossible, of course. Not even a thousand-year-old Dracula, or the even older Rolling Stones, could hope to stand beyond Berry’s forest of evergreens.

But hitting 90 is an achievement to celebrate; richly, zestfully, and lustily. Despite a birthday posting last week at our RPM: Life In Analog Facebook page, we’d be remiss if we didn’t formally  enshrine a humble birthday wish with a few words in praise of a singular music maverick and the True King of Rock ‘n’ Roll (with honorable mentions to fellow pioneers Little Richard, Elvis Presley, Carl Perkins, Bo Diddley, Buddy Holly, Fats Domino, Jerry Lee Lewis, and the scores of blues and country artists that came before and inspired all, including Berry himself).

More than half a century after they were recorded, the hotwired teenage-ready anthems included on Berry’s seminal Chess Records anthology, “The Great Twenty-Eight,” remain both a bedrock foundation of, and towering monument to, the world of music they launched and artists it shaped — a few folks you may have heard of named Elvis, The Rolling Stones,  Beatles, and Jimi Hendrix (not to mention Paul Anka, John Denver, and Leif Garrett; yep, they all covered Chuck).

In fact, if you want to hear the distilled chemical essence of where the young Stones — and specifically guitarist Keith Richards — got their sound, all you have to do is listen to “Johnny B. Goode.” As indebted to Muddy Waters as they were for inspiration, it’s no accident that the first Stones’ single was a cover of Berry’s “Come On,” or that they’ve recorded and performed a good chunk of Chuck’s tunes across their 50+ year career, including making not one but two Berry numbers — “Carol” and “Little Queenie” — staples of their ’69 U.S. Tour nightly set list. (Rollicking readings of both songs can be found on the band’s seminal “Get Yer Ya Ya’s Out” live LP). 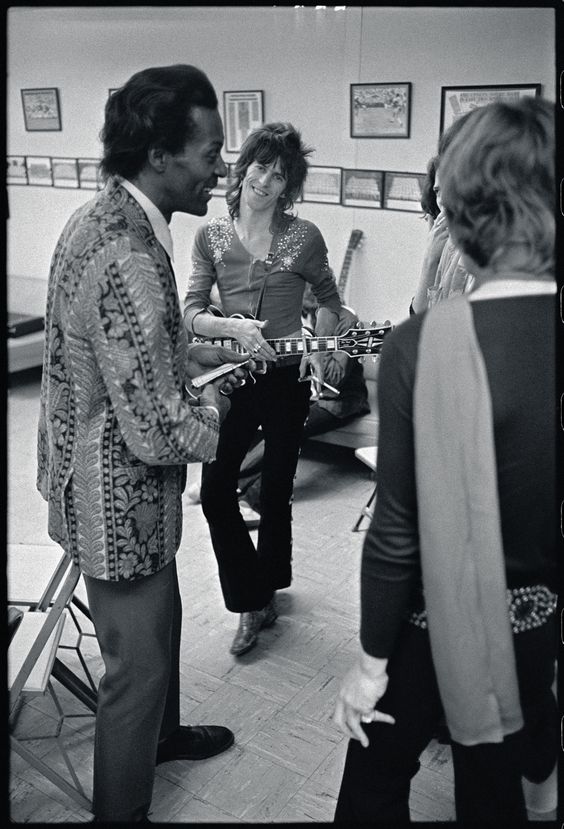 Photograph (and below) By Ethan Russell

Years later, Richards would go on to co-produce “Hail Hail Rock ‘N’ Roll,” a Berry concert documentary that featured the often irascible, testy, entertaining subject in his element, surrounded by a bevy of superstar acolytes.

Berry’s musical influence has also indirectly shaped the course of music history in more ways than one. For instance, in addition to the Beatles having recorded spirited cover versions of Berry’s “Rock and Roll” and “Roll Over Beethoven” early in their career, the John Lennon-penned “Come Together” from 1969’s “Abbey Road” LP borrowed an albeit altered melody from Berry’s “You Can’t Catch Me” and even quoted a song lyric in its otherwise abstract wordplay verses ( presumably as a playful homage).

Chuck’s music publisher noticed the similarities between the two compositions and in 1973 sued for plagiarism. Lennon settled out of court, agreeing to cover several songs held by the publisher that eventually became Lennon’s “Rock ‘n’ Roll” LP released in 1975. 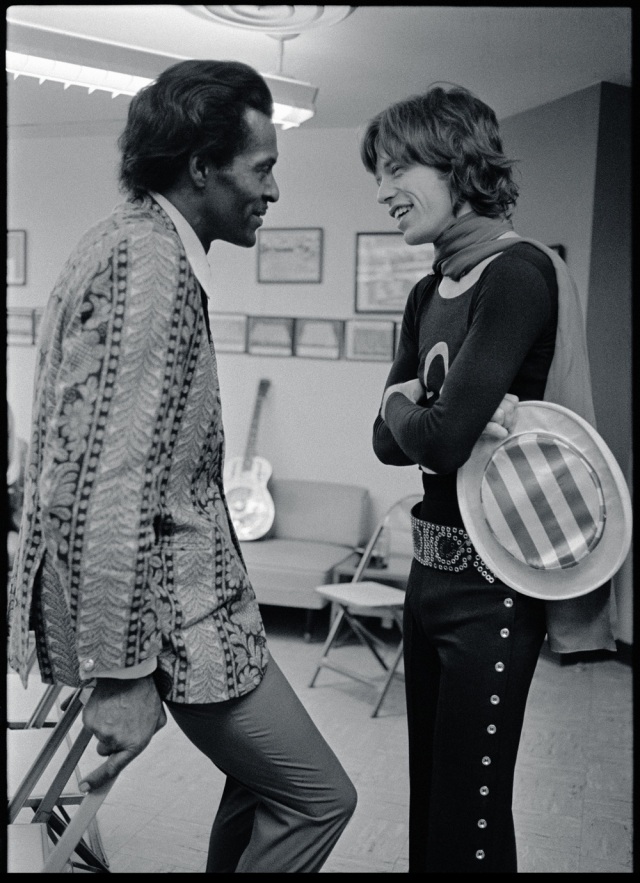 Chuck Berry and Mick Jagger, backstage 1969, by the great Ethan Russell (more of Mr. Russell’s exquisite work capturing and documenting the arc of rock history can be found at http://www.ethanrussell.com).

Chuck was and is a progenitor of the gloriously messy swamp of cross-pollinated sounds we call rock ‘n’ roll. With his own influences as disparate as T-Bone Walker and Nat “King” Cole, Berry burst on the national scene in the early 1950s as a five-tool artist who wrote, sang, played, performed, and created an exciting new form from existing traditions, effortlessly fusing elements of nascent Teenage Pop (which he helped invent), Tin Pan Alley, Blues, R&B, Rockabilly, Swing, and even Country and Western. 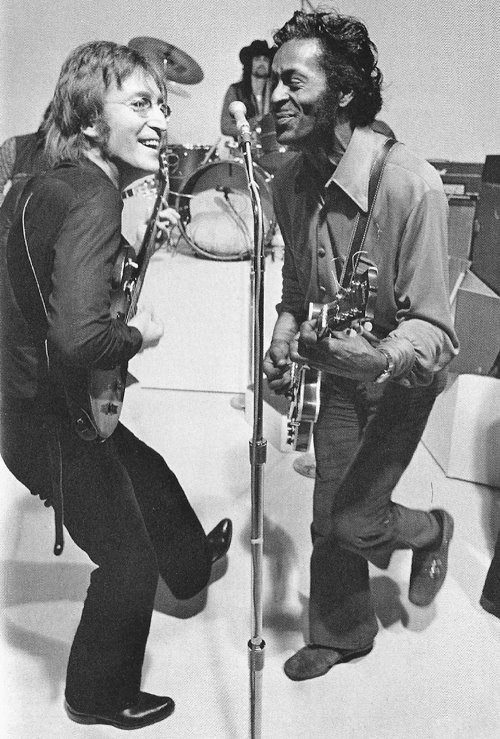 I had the great privilege of seeing and hearing this Brown-Eyed Handsome Man perform at a fundraiser for a recovery facility whose mission was helping musicians grappling with substance abuse and addiction. It was some years back in Boston when Berry was flirting with turning 80. He played a short but playful set, taking a cursory inventory of his catalog.

But we didn’t need a marathon show to be reminded of just how much of Berry’s timeless music we take for granted because it is so deeply ingrained, so thoroughly embroidered, into the fabric and core identity of rock ‘n’ roll. Its wry, pithy, and poetic spirit lives — as do the outright riffs, licks, and sentiments — inside the adolescent daydreams of several generations of artists who came after. As John Lennon said, you could call it rock ‘n’ roll music. Or you can just call it Chuck Berry.