The Glands were the perfect, enigmatic epitome of ‘indie-rock’ (whatever and however you conjure the term), and a woolly little ball of fuzzy contradictions. They were over-achieving, under-heard slackers from the coolly independent musical hotbed of Athens, Georgia, yet somehow, always seemed to stand apart from it. They were beloved and aloof. They made and released a pair of albums — near-perfect slices of alternately hazy and focused indie-rock/pop near the dawn of the  2000s … and then vanished.

They wove a casual, if improbable, yarn around the first one to justify its title. It was called “Double Thriller,” the story went, because the band mixed its music on the same console Michael Jackson supposedly used (yeah, right). Two years later, in 2000, they decided to simply self-title their superb second album, bucking the conventional wisdom that going the eponymous route was usually reserved for an artist’s debut.

Shrugging their shoulders at conventional wisdom — which dictated playing shows as often as possible, say, or promoting themselves in the press — was something The Glands excelled at. Not that they intentionally worked hard at perfecting a perverse reverse playbook for success. It wasn’t about arrogant disregard or lack of commitment (OK, maybe it was  a little bit about lack of commitment). Rather, the frustrating paucity of their catalog (two albums and out) seemed indicative of the band’s living embrace of the shambling end of the indie-rock spectrum. The Glands made Pavement — a band whose aesthetic calling card was sleepy slackerdom — seem like Henry Rollins after pulverizing a triple espresso.

What was never lacking, however, or slacking — when it happened — was the music itself,  a damn near perfect distillation of juxtaposed late ’90’s/early ’00s indie rock: on the one hand, wiry, restless, and taciturn; on the other, hazy, sexy, and unfurling at its own languorous, sighing speed. For me, shorthand signposts of similar style were luminously lit-from-within, self-subverting outfits such as Sparklehorse, Wheat, Spoon, Grandaddy.

At the center of those songs was singer-songwriter Ross Shapiro, whose conversationally woozy drawl and sly, sticky, sour-sweet phrasing could not have been more ideally suited to supply the voiceover text to those little snapshot songs of his. (Check out a few of the audio examples at the end of this post to see what I mean).

Of course, I was instantly enthralled, and championed the band whenever and wherever I could. I reviewed both of the band’s albums, the first for The Boston Phoenix in 1999 (“Double Thriller,” released by  Bar/None Records) and the second — and it turns out, final disc — for CMJ New Music Monthly in 2000 (“The Glands,” released by Capricorn Records which, in a bout of terrible timing, folded soon after the record came out). In the autumn of that year, I also conducted a conversation with Shapiro for a profile piece on The Glands that ran in the Boston nightlife magazine Stuff@Night.

Shapiro eventually stopped doing interviews because, as he would reportedly say later, they made him realize what a “prick” he was. Nevertheless, he could still be found holding court and making his music-industry opinions known at Schoolkids Records, an Athens branch of the independent  record store chain that Shapiro owned and operated until it closed its doors in 2011.  The last anybody heard was that new music from The Glands was supposedly in the works. At long last, possibly, one of the coolest voices in indie-rock would be back.

But sadly, that voice is no more. The news of Ross’s death last week, at age 52, reportedly after an illness, hit the Internet and traveled fast, spreading quickly beyond Athens and circulating throughout indie-rock circles here and abroad. Even flavor-of-the-month British music magazines lamented the loss of a band that had not even made a record in nearly 16 years. Which says a lot about the quality, if not quantity, of the music. Not that many people may have heard The Glands in their lifetime. But those who did remembered just how good those albums sounded — and how casually, how effortlessly, they stood apart from the pack.

The Glands: Getting Under My Skin

Trying to get singer-guitarist Ross Shapiro to talk in detail about the Glands, the loosely knit Athens-based outfit he formed with drummer Joe Rowe a few years ago, can be almost as slippery an experience as listening to the band’s music. It’s not that Shapiro’s not a friendly sort — he is, in a just-woke-up, affably shambling kind of way. It’s just that, well, pinning down the band’s origins and gleaning Shapiro’s perspective on the music he’s largely responsible for creating can feel a bit like climbing through a haze. An often pleasant one, mind you, but a haze nonetheless.

The same can be said about much of the Glands’ musically bewitching eponymous sophomore album, released earlier this year on Capricorn Records. The Glands is an altogether charming and devilishly clever follow-up to Double Thriller, the band’s 1998 debut whose title attempted — albeit facetiously — to one-up Michael Jackson’s similarly titled 1982 blockbuster album. Advance publicity had it that the band had bought, and used, the actual mixing console employed by Jackson during the making of the self-appointed King of Pop’s career-capping album, but Shapiro now admits he may have been exaggerating just a teensy-weensy bit.

“I like to think it’s part fact and part fiction,” he says with a Cheshire cat grin that you can practically hear on the other end of the phone. No matter. Even without the Eddie Van Halen guitar solo, the music on Double Thriller sounded like a million bucks. While it didn’t do quite the business that Jackson’s kajillion-seller did — okay, not many people even heard it — those who were fortunate enough to stumble upon Double Thriller tended to fall in love with the band straight away. It’s a safe bet that The Glands (which began life as a duo but have since expanded to a quintet) will no doubt attract a few more converts when they open for Elf Power at the Middle East Upstairs November 18 (2000). To hear Shapiro tell it, the Glands were not so much a band as they were a happy accident. 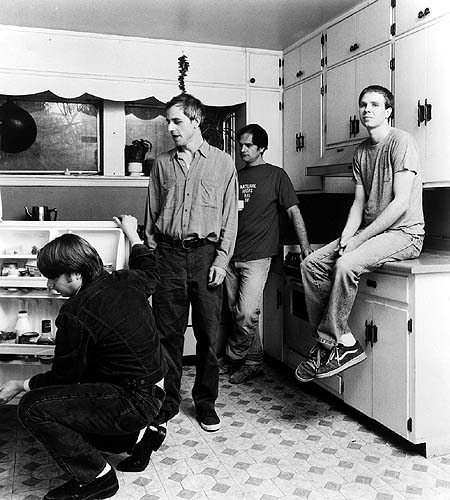 Any two dollar wine in the fridge? Ross, standing second from left, inquires.

“The first album was somewhat of a learning experience. It was mostly just me and Joe (Rowe) … we were just doing it for us, kinda,” he says. “And we’d invite all sorts of people down to try things. Because we weren’t really a band, a lot the songs were made up on the spot. And if it’s just two people, there are a lot of tracks to fill. With the new one, things were a little more planned out and organized.” The deceptive beauty of The Glands is that the disc sounds anything but. The very first thing you hear on the disc is the background noise of what sounds like an airport or train terminal followed by an alarm clock rousing Shapiro and a couple of staggering guitars. The song’s called “Livin’ Was Easy” and the mood perfectly suits Shapiro’s laconic vocal style (which he likes to augment by soaking it in pools of echo). He’s wondering why he left where he was, and trying to rationalize where he’s ended up. At the end of the track, he’s still not sure and neither are we.

Over the course of the album, we’re treated to thirteen similar such obliquities over a host of musical moods ranging from the crackling New Wave pop of “When I Laugh” and to the Ben Folds-ish bop of “Swim” to the opiatic languor of “Mayflower” to brat-boy rockers like “Straight Down.” One caveat, however: if you had counted your blessings at never again having to endure the Four Seasons’ “(December, 1963) Oh, What A Night” now that you’ve ditched those car rides to soccer practice with mom, you’d better skip the slyly funky — and naggingly familiar — “I Can See My House From Here.” The hearty souls (and closet Frankie Valli fans) among you need not worry. The track, like the album itself, is sexy, mischievous, and fun.

In short, The Glands happens to be one of the sharpest, best conceived pop albums you’re likely to hear this year or next. It’s what would happen if the 1966 Beatles traded a few bong hits with the Flaming Lips and started playing Cars covers. For the listener, it’s just about the most fun you can have without doing something illegal or having to take your clothes off (although you may be tempted to do both). So how does the band manage to strike that delicate, often elusive balance between disciplined popcraft and inspired amateurism, anyway? Shapiro chuckles at the suggestion of competence: “I’m always questioning whether we are working it out, and whether we are pulling it off.” And with that, he slips back into the haze. 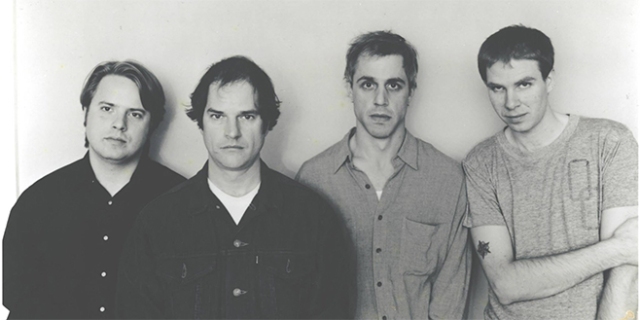 Memo to Michael Jackson: forget Macaulay Culkin. The guys in the Glands are your real admirers. For Double Thriller, the Athens foursome’s 1998 debut, the band reportedly used the same mixing console the King of Pop employed for Thriller. Now, on their eponymous sophomore disc, a bouncing melody pilfered from the Jackson Five’s “ABC” propels “I Can See My House From Here” while Glands’ main man Ross Shapiro sings: “Lay in the summer grass / Stay in one place/ Someday everything will come our way.” Funnily enough the idea works because the optimism in Shapiro’s lyric parallels the sunny euphoria of the Jacksons’ original. The Glands have more up their satin-gloved sleeves, however, than ‘spot-the-influence’ shenanigans. As on their debut, the band again showcases a tasty eclecticism and range that in less interesting hands might merely amount to a lack of focus. But here the contrast between the stagger-step guitars and off-kilter harmonies of “Livin’ Was Easy” with the compressed clarity and New Wave sheen of “Doo Doo Doo Doo” throws each into stunning relief of the other. “Mayflower”, with its lazy lap steel and Shapiro’s languid, echo-treated vocal, pulses with the hazy glow of summer. “Work It Out” snarls with that rarity of indie-pop rarities: an honest-to-goodness guitar solo. It’s in perfect keeping with an outfit whose knack for coming up with classic-sounding riffs seems as easy as ABC.

← SINGING SONGS ABOUT THE SOUTHLAND: The Drive-By Truckers Raise A Ruckus
STARS & STRIKES AND THE SPIRIT OF ’76: Dan Epstein Talks Baseball, Beer, and Bowling With Billy Corgan →