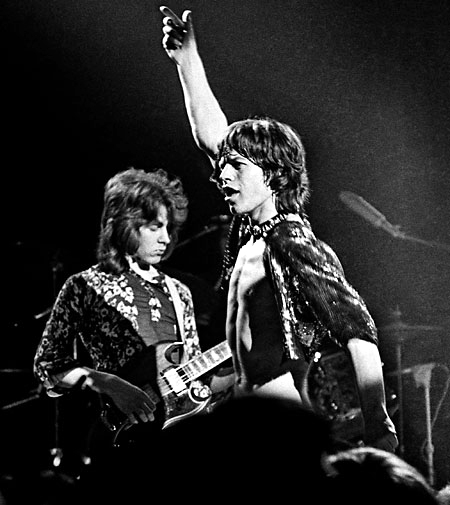 Today marks the anniversary of one of the best (and more importantly, audio and visually documented) “in-between” Stones shows and tours during their prime: a March 26, 1971 concert at the small Marquee Club in London, the same venue where they got their start  as a band some nine years earlier, when singer Mick Jagger and guitarist Keith Richards were still teenagers. Those were the early days of blues and R&B covers, with original compositions like “(I Can’t Get No) Satisfaction” still barely a gleam in Jagger’s eye. The ensuing nine years between 1962 and 1971 may as well have been an eternity (and in a sense, it was in the scope of  the pop, rock, and soul music of the day).

Much like the Beatles, Bob Dylan, the Who, and the Kinks, the Stones’ evolution in every dimension and aspect of their musical life during that decade — as songwriters, musicians, performers — was a quantum leap forward into previously unimagined creative territory.

Played before a small audience of family, friends, and invited guests, the Marquee show capped the band’s brief 1971 “Farewell To England” jaunt that had come in the wake of both the 1969 U.S. tour, and a 1970 European jaunt to shake off the heebejeebies and bad-acid flashbacks of Altamont. The epic U.S. 1972 “STP” tour and  iconic “Exile On Main St.” was yet to come. 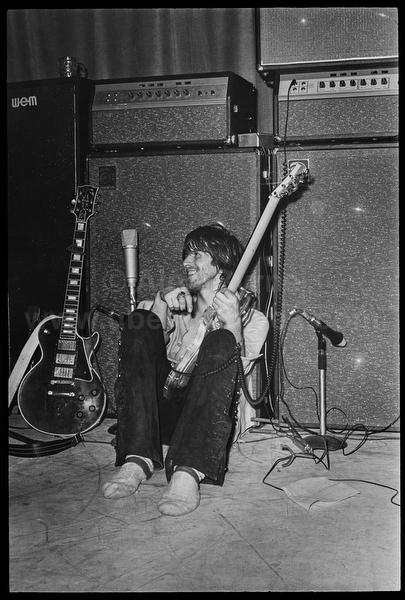 Keith shows up the worse for wear at the Marquee, March 26, 1971. Photo credit: Alec Byrne

So in 1971, the Stones were in flux and in-between in almost every sense of the phrase. They had finally extricated themselves from their exploitive Decca recording contract, had launched their own Rolling Stones Records imprint through Atlantic, and yet were being hounded and haunted by a business manager, Allen Klein, who would  exploit them further. (If you’ve ever wondered why and how Mick Jagger became such a ruthlessly shrewd businessman, Klein and Decca — as well as Mick’s abbreviated tenure at the London School of Economics — are the likely culprits). 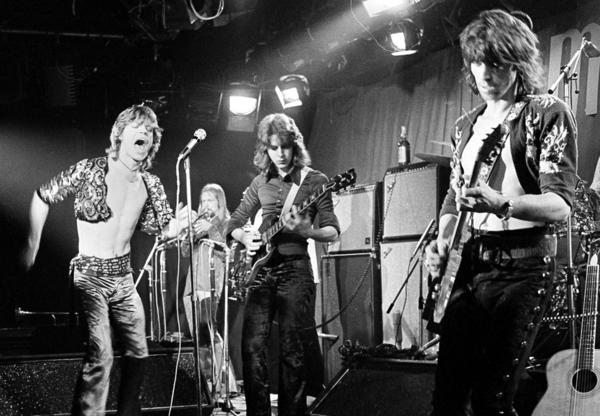 The Stones were little more than a full year into breaking in new guitarist Mick Taylor, as well as a new small horn section that Jagger claimed he had wanted to add to the Stones’ stage act for years. At the time, the Stones were also writing a lot of new material that would continue their streak of classics, including the imminent release of one of their two or three very best albums, “Sticky Fingers,” which would come out only one month after the Marquee Club concert (several songs from the album are debuted here). A good chunk of that material would also eventually find its way onto the double-album sprawl of “Exile On Main St.,”  unleashed a year later, in May of 1972.

Away from the  studio and stage, most of the the band had decided to decamp from England to escape its exceptionally high tax laws (hence the “Farewell to England” tour), with band members scattering to European points more pastoral and picturesque.  Jagger was also getting married to Bianca Pérez-Mora Macias that year, while Keith was drawing deeper into his sundry nasty habits: elixirs, potions, pills, powders, you name it he took it. But he had not quite yet become the full-blown junkie who would stagger through much of the ’70s topping annual “most likely to die this year” polls —  and proving the amateur odds makers wrong with every new year’s clink of a champagne glass. 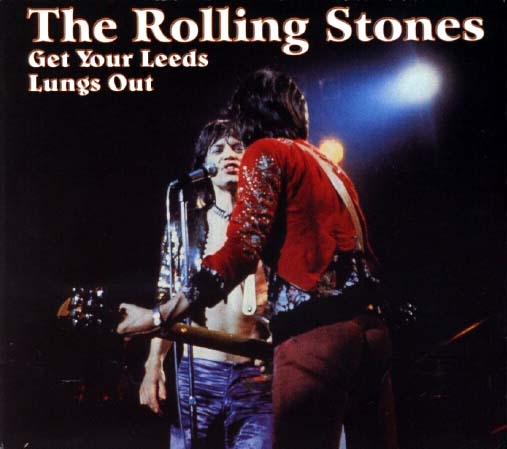 One of the many unofficial LPs, CDs, VHS, and DVDs issued over the years capturing the Stones’ legendary Marquee and/or Leeds shows.

The Stones were reaching their apex in 1971, rising like a phoenix from a creative, emotional, and commercial  downward spiral brought on by drug busts, the disastrous “Their Satanic Majesties Request” Sgt. Pepper knockoff, the deterioration and death of Brian Jones, and Altamont  (see my related post “A Banquet Of Butterflies For Brian” for more on this period). The rejuvenation had begun with the magnificent country-folk-blues tapestry of 1968’s “Beggars Banquet” and ’69’s epochal “Let It Bleed.” Even their live album, ’70’s “Get Yer Ya Ya’s Out,” showcased the new-look lean touring machine the group had become in the wake of  Jones’s death.

Some observers wondered whether the timing of “GYYYO”‘s release had to do with capitalizing on the immediate, surprising popularity of “LiveR Than You’ll Ever Be,” one of the first bootleg LPs produced (along with Bob Dylan’s “Great White Wonder”) that captured the raw energy and excitement of  a Stones’ Oakland show earlier that autumn. So much so that rock critic Greil Marcus even reviewed the bootleg in the pages of Rolling Stone magazine.  That speculation aside, “Ya Ya’s” was soon being heralded as the best live album of all-time (although fans of the Who’s “Live At Leeds” LP might have something to say about that). 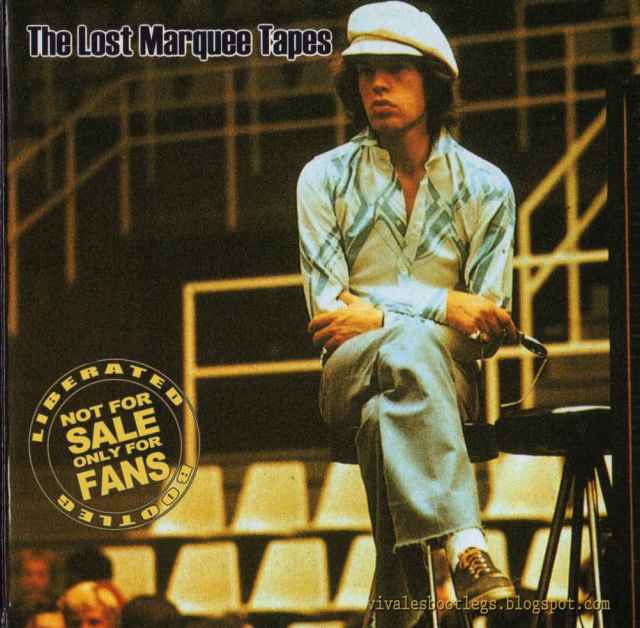 Like a true pro, Mick surveys the room for sound and sightlines, 1971. Artwork for another unofficial CD title.

But the Stones were only getting stronger. What follows, then,is a link to one of the rarest, rawest, and most sumptuous, prime-era Stones shows known to exist. It is a shadowy, semi-official affair, having been professionally recorded and sporadically broadcast by the BBC over the years. Yet the concert, as well as a wonderful companion recording I’ve included here, commonly referred to as “Get Your Leeds Lungs Out,” still remains commercially unreleased and unavailable, by the Stones or anybody else.

Of the two ’71 shows, “Leeds Lungs,” which has seen many underground LP and CD releases over the decades, is actually far superior to the Marquee show as an audio document (although sadly, no known video footage apparently exists of the Leeds show). Here’s hoping that the recent and long-overdue opening up of the Stones concert vaults to the public continues with an official issue of these two 1971 titles by the Stones (there is certainly more money to be made, boys, but we’re all of us growing older). 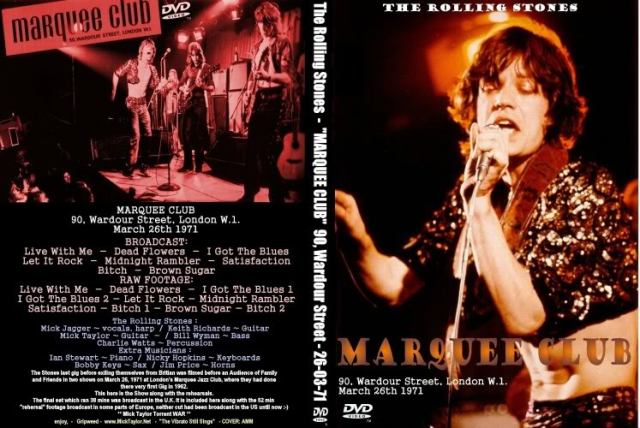 Marquee Club DVD from where this video comes.

The audio/video of the Marquee show has also circulated for years among collectors, including a new combination CD/DVD title that I recently came across and summed up for the terrific Collectors Music Reviews blog (the title below is well worth seeking out for Stones fans who don’t mind doing a little digging around the Interwebs).

One final bit of trivia of note here is that, reportedly, Keith — having overslept or…something — roused himself and came straight to the gig, late, unshaven, in the same clothes he had been wearing for, well, awhile, and plugged in his guitar in the nick of time. As Stones bassist Bill Wyman recalled: “We went to the Marquee (and) Keith didn’t show up for about four hours. When he did, he looked awful. He was dirty, unshaven, and very untogether.”  Funny, “untogether” is the last word I would use to describe the band’s playing and performance on this night. See (and hear) for yourself. 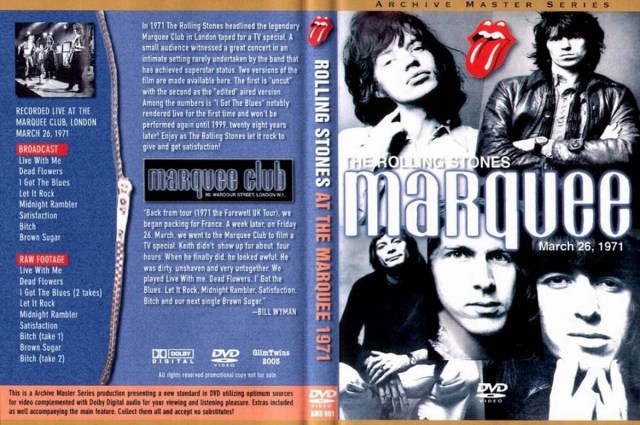 …and the hits keep a’comin’! 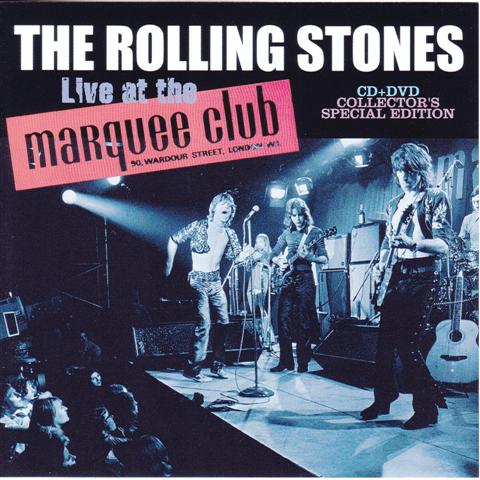 The latest, and possibly best, unofficial version of the Marquee show, complete with DVD that airs three different versions of the program broadcast by the BBC.

THE ROLLING STONES, “Live At The Marquee Club” (Goldplate): This CD and DVD combo makes a strong bid for being the definitive title of this March 26, 1971 show, with the CD offering the complete performance including false starts, second takes, and pre-rehearsals of a special BBC television show capturing the Stones’ return to their early stomping grounds of the Marquee. A special delight is hearing early live readings of “Bitch” and “Brown Sugar,” released that month on the “Sticky Fingers” album, as well as another “Sticky” track that has rarely been played, “I Got The Blues.”

One of several top-notch Goldplate Stones releases this year, it comes in the best sound quality I’ve ever heard it (most Marquee releases have been marred by muddy sound). The companion DVD offers no less than three versions of the performance (the recent re-broadcast TV version; the original TV version; and the unedited long version). A very nice audio and overall upgrade of a classic Mick Taylor-era performance, from a rarely (and often poorly) documented year that saw the Stones on the road for only a brief “Farewell To England” tour. 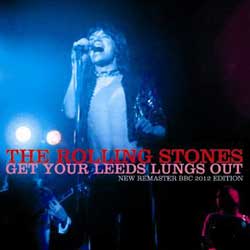 There are more varieties of this show than the costume changes in Mick’s wardrobe closet. 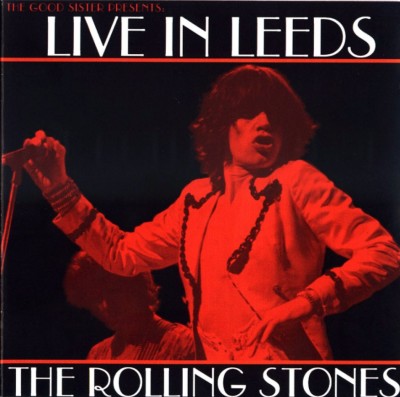 A nice numbered limited edition version of the “Get Your Leeds Lungs Out” concert, March 13, 1971, from the sadly defunct Sister Morphine collectors’ label. 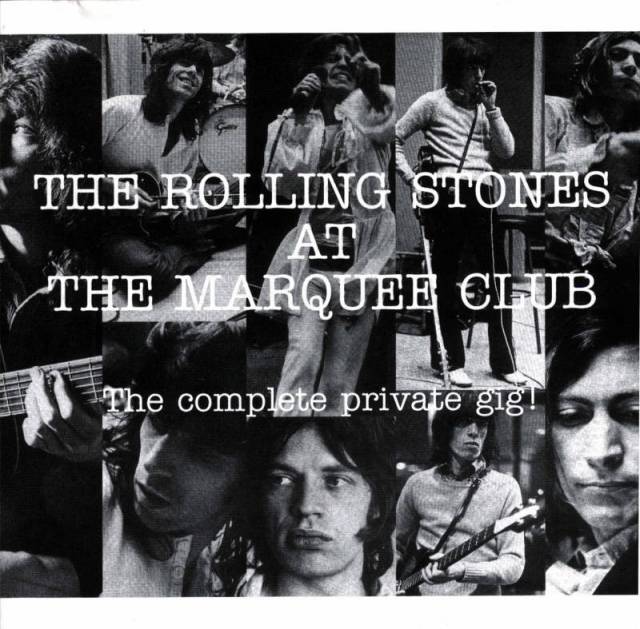 One of the earliest releases of the Marquee show by the long-defunct German collectors’ label, The Swingin’ Pig. Most of the cover photos are actually from 1968-69 9save for the Jagger pic at bottom center, 1971) 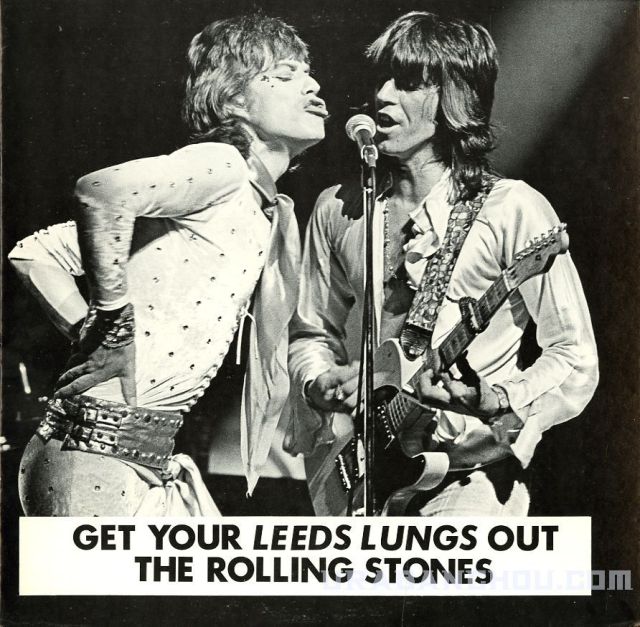 Although the era depicted in the pic is off by a year, this is a great boot and a great shot for the classic bootleg.

Watch and listen to the entire March 26, 1971 Marquee performance here, in as good audio-visual as I’ve seen: http://www.youtube.com/watch?v=Iii154tjv2Y 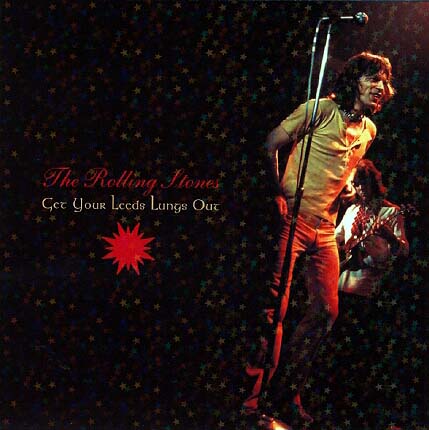 The Halcyon label offered their own glittery take on the Leeds concert.

Listen (and watch) to one or all of the cuts on the officially unreleased recording of “Get Your Leeds Lungs Out” here:http://www.youtube.com/watch?v=nhK0NA-I8uM&list=PLD079C02575DC198B

A baseball publication that resigns to the awkwardness of life and the 8-1 putout...Stay in Oakland! (cococrispafro@gmail.com)