Liner Notes: My Life In Print And Beyond 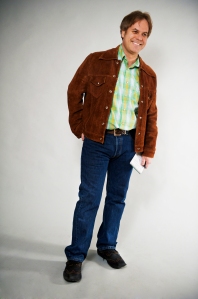 About Me, or An Analog Guy in a Digital World

This is an ironic place to be. For starters, most of my whole writing life has been on deadline and in print. By print. For print. About print. When I was ten years old, I began researching, writing, illustrating, and self-publising a series of weekly magazines (printed on folded yellow lined legal paper in a strictly limited edition of, um, one per household), which I then foisted without mercy or restraint on my mom, dad, and younger brother. I did that every single week for seven straight years (true).

The summer before my senior year of high school, I got a job as a sports editor of my hometown weekly  newspaper. My 17-year-old’s resume basically consisted of the stack of  those homemade magazines, painstakingly preserved by my mother. They got me my first job (first professional salary: $15 per week, which coincidentally is about what I earned reviewing albums for music magazines fifteen years later). Glamorous it may have been. Lucrative it was not.

I spent roughly ten years as a daily newspaper reporter in Massachusetts and New Jersey covering everything from school boards to serial killers to junkie prostitutes to former Vice President Dan Quayle’s potato spelling gaffe to the ultimate assignment in municipal banalities: the dedication of a parking lot. In between, there were about 2,000 stories: many serious, some funny (a few intentionally, some unintentionally), a few so absurd that I can hardly believe they happened.

That’s a lot of writing, a lot of note-taking, a lot of typing (on an old school Smith Corona standard [read: non-electric] typewriter), then bulky, boxy word processors, and a lot of printed pages.

So what came next has always struck me as ironic, and perhaps inevitable. In 1995, after sporadically writing about music for my daily newspaper and a few poor-paying national music magazines—and loving every minute of it—I decided to devote myself to writing about music full time. I guess I needed—to mix metaphors— to take the plunge and try to realize a dream that had been dwelling, then building and rolling like a gathering storm in my feverish head and fluttering heart.

So I threw myself into becoming a rock critic in my early thirties—which was about ten years later than everyone else I knew or read had started doing it, or caring about it. In short, my brilliant career move was the exact opposite of logic, pragmatism, or common sense; an inverse trajectory of a career in journalism. Upon leaving the world of straight print journalism (read: a staff job, paid vacations, and health benefits), I discovered that the first places I found the freedom to write about music were for the then fledgling music websites and online afterthoughts to the print mags and newspapers whose media dominance was rapidly diminishing. Indeed, just a few short years later, everything had changed, and exploded, into a digital realm of pixels and downloads.

Although I would later hook on with a series of terrific daily and weekly publications and continue to work constantly in traditional newsprint forms, pretty much everything I write and piece I file runs simultaneously online and, in some cases, with considerably more content or sidebar bells and whistles (slide shows, photo galleries, audio clips, sound bytes, etc.) In fact, it is now virtually unthinkable to conceive of a publication that doesn’t have a significant, forward-thinking Internet presence. The same goes for writers, photographers, musicians, artists, and anyone else who wants people to view, read, or listen to their work. In short, the communicative potential, I came to realize, vinyl-collecting, analog tape cassette recorder-wielding Luddite though I may be, is truly exciting and endless.

Which brings us to the here and now. I am launching this site in the hopes that it will provide a thorough “Best of” archive of a good chunk of the myriad music stories, concert and album reviews, and essays I’ve written on worthy musicians, bands, scenes, and trends over the years.

Some appear, more or less, represented in their published form. I’ve been fortunate to work with talented editors with discerning taste and a light touch who rarely radically altered what I wrote. Many other pieces appear in their longer, “director’s cut” versions that various publications simply did not have the room to run in the size I submitted them.

But I also hope this will provide a platform for me to continue writing, riffing, thinking, and listening (always listening); a springboard for sharing opinions about the two things I love most and best: music and writing. When both dovetail, the result is akin to a band locked in a groove and in sync with one another; rhythm, melody, language, and purpose. I hope this site will look, sound, and read that way to you. Thanks for visiting. I hope you take a look around, find something you enjoy, and enjoy your stay.

Come to think of it, this place doesn’t seem so ironic after all.