THE COST OF A SONG: HONKY TONK HEARTBREAKER JAMES HAND DIES AT 67

Texas troubadour James Hand, a reverent Country & Western traditionalist whose music sounded beamed in from an earlier age of rodeos and radios — and who, later in life, enjoyed success and won a devoted following of fans, musicians, and critics — died early yesterday morning at a hospital in Waco, Texas, surrounded by his family. He was a month shy of his 68th birthday.

According to a statement posted a day earlier at his official Facebook page, Hand had been hospitalized for unspecified heart problems that led to further complications. He was scheduled to play a local show later this month, June 21, at the Little Longhorn Saloon in Austin, Texas, the same venue where he played his last show on March 15 of this year.

An outpouring of prayers, tributes, and sympathy has accompanied the news of  the artist’s illness and passing. Many pointed out Hand’s warmth and humility, traits matched only by his talent.

“We’ve seen post after post today of the sadness of James’ passing, and the joy he brought to all of you,” reads a statment posted at his page. “He would be humbled by all of your kind words, but tell you he was nothing special. And for the first time in his life he would’ve been wrong. James, you sir, were one of the most special men and singer/songwriters we have ever had the priviledge of knowing. You left this world too soon and we will all feel this hole for a long time to come.”

But as always, we can take solace in Hand’s music. As James himself once sang, with comforting, buoyant certainty on his 2014 album, “Stormclouds In Heaven,” he’s departed for a destination he described as a place “where men like me can fly.”

As a tribute to, and remembrance of, a musician whom I loved the instant I heard his songs (and then liked even more once I met and talked to him), here’s a slightly expanded “director’s cut” version of my original profile piece on James that was published in The Boston Globe back in 2007. At the time, Hand was signed to the venerable roots-music oriented Rounder Records label (then based in Cambridge, Massachusetts, and now based in Nashville, Tennessee).  After what already seemed like a lifetime lived by the time he was 55, Hand’s hardscrabble tales and timeworn tunes were finally beginning to break through to a wider, avid audience who’ve never stopped listening. 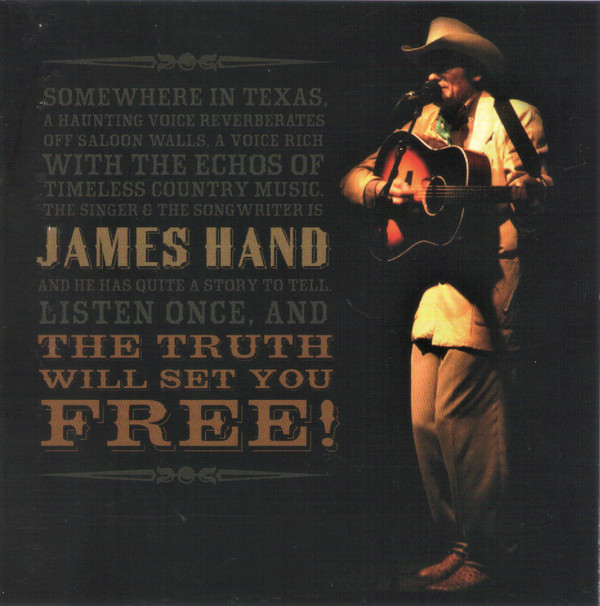 Texas singer-songwriter James Hand doesn’t go looking for trouble or misery. But if the songs on his latest album, “The Truth Will Set You Free,” are autobiographical – as he claims more than a few of them are – misery and troubled times have had a way of finding him.

“I’ve been like this my entire life,” says Hand, 55, whose first nationally released album for the Rounder Records label (he’s also issued three discs on his own) features a handful of tear-in-your-beer weepers with titles such as “I’ve Got A Lot Of Hiding Left To Do,” “When You Stopped Loving Me, So Did I” and “Just An Old Man With An Old Song.”

“People ask me why I write such sad songs, but I’m a happy guy – really, I am. I don’t search for a dark cloud, and when it don’t rain on Sunday, I don’t say, ‘Well, it’s gonna rain next Sunday.’ But that’s a good question and I’ve often wondered about it myself.”

Although his repertoire includes slyly funny slice-of-life sketches such as the disc’s title track, even those are about breakups, crack-ups, and slip-ups. As Hand admits, he’s always been drawn to “the dark side of things. Sometimes I think I’ve been living it since before I was born.”

The old-fashioned songs Hand writes and sings – about heartache, hard luck, and hard-won redemption – certainly sound as if they’ve been around since before he was born. They’re all his, but you’d swear you can hear Hank Williams, Lefty Frizzell, and George Jones knocking around the lonely barrooms and locked back doors inside Hand’s mournful music. And it costs. “Every time I get up there to sing, part of me doesn’t come back,” he says. “If you don’t do that, you’re nothing but a charade.”

“It’s a voice for the ages,” says Rounder co-founder Ken Irwin, who first heard Hand’s self-released music through friends and was immediately floored. “I’ve always loved that period of fifties country, and that’s obviously where he was coming from. ”

Indeed, with a reedy drawl that sounds tailor-made to be piped through a roadhouse jukebox, an exceedingly gracious and humble manner, and the nickname “Slim” to boot, Hand is a soft-spoken throwback to a bygone age. “The Truth Will Set You Free” evokes an era when cowboy singers in fringe shook off the dust of the dirt road, held their guitars high against their chests, and brought a measure of comfort, humor, and escape to workaday folks at the bar.

One slab of honky tonk autobiography, “Here Lies A Good Old Boy,” offers a self-deprecating yet unflinching assessment of Hand’s own vices and virtues. It resonates because – just like those folks he sings for and about – Hand’s personality isn’t a professional pose.

He was born in a town called West, Texas, a few miles north of Waco. He says he was  only a child when something strange started happening. He started hearing things. Not voices, exactly. “Have you ever been out in the woods,” says Hand, “and heard music so clear in your head that you thought it was coming from a radio station? When that starts happening to you when you’re about nine or 10 years old, it’s frightening.  I couldn’t explain it to anybody.”

When he got older, the music stopped scaring him. He started playing what he heard, performing in smoky bars and dives in and around his hometown. Hand eventually got his big break decades later when Irwin made a point of catching one of those shows while attending the annual South By Southwest music conference in Austin, Texas. Hand – unsigned and unknown to all but the bar regulars – was not playing a festival showcase, just another local gig in town.

“I just thought, how can this still be happening?” says Irwin, recalling his first impression of the man upon seeing and hearing Hand in the bar.  “Here’s someone who is doing it now and is not a pretender. This is who he is and how he grew up and what he’s learned.” 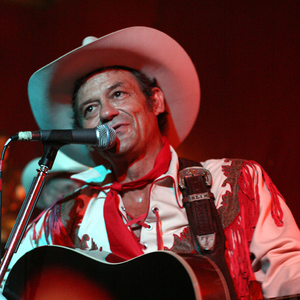 “The long and short of it is, if a fella’s going to sing and play for the people, you sing to them,” Hand says. “You don’t sing at them or down to ’em or around ’em. Of course it’s easy for me to be simple because I don’t know any other way. ”

When the time came to record “The Truth Will Set You Free” with the high profile co-producers Ray Benson (co-founder of Asleep At The Wheel) and Lloyd Maines (Dixie Chicks producer and Dixie Chick Natalie’s dad), bad luck struck and then got worse.

“My momma was ill when we started and she passed away,” recalls Hand. “And then daddy became ill at the end (of recording) and he passed away.” Hand postponed the recording sessions indefinitely to be by his father’s side. “It was a tough time, but the label gave me all the latitude I needed. They were very kind. Mr. Irwin went far above and beyond what anybody ought to do for an unknown artist.”

“When you have an artist who’s so emotive and so close to his feelings, you just have to wait until he’s in a place where he can do his best,” Irwin says. “We figured, if he could wait after 53 years, then we could certainly wait a few more months.”

Since those dark days, things have been looking up for James “Slim” Hand. He’s getting ready to make another album and plans are underway for a European tour next year. There’s even a documentary about his life in the works. But despite the higher profile that comes with critical acclaim and a growing international audience, Hand insists he’s never far from his roots or his modest beginnings as a long distance trucker, bouncer, horse trainer, you name it.

“I’ve done every conceivable thing you can imagine to put on the back of a country album, and some stuff that you don’t want on the back of a country album,” Hand says with a chuckle. “I’d say 90 percent of what I write about was suffered first-hand. Now, if somebody said to me that we’re going to write a song about bungee jumping off the Empire State building, then I’m going to be pretty helpless because, first, I’ve never done it. And secondly, I’m not going to.”

Hand writes and sings what he knows, but that’s not to say that he allows himself to be hemmed in to the narrow expectations of genre or geography. “Somebody asked me about Texas music,” says Hand. “And I said well, I don’t want to insult anybody but I think there’s more to Texas music than singing about eating chili and drinking Lone Star beer and kissing Willie Nelson’s picture. That’s all fine, well, and good, but if you start restricting it to one geographical location, you might as well stay in your front yard.”

For Hand, the geographical landscape of country music is as wide as it is deep, and steeped in history. He was drawn to it, and it drew him in. “It’s what I was raised around, and other than being some years older, I wear the same kind of hat, the same everything that I wore in high school,” says Hand, who openly admits being alienated as a teenager with much of the rock music that was radicalizing and transforming popular musical culture among young people.

“I graduated in ‘70 and when I was in high school, probably between ’66 to ’70, had the worst music of any era in the world,” Hand says in direct contrast to what many might consider a high water mark for the music’s broadening scope and increasingly psychedelic textures. “It was all so much protest stuff going on. I liked the Mamas and The Papas,” he allows, “But what I listened to back then was old rock from the Elvis (Presley) era. I thought the Beatles were just marvelous when they came out.” But groups like Iron Butterfly singing “In A Gada Da Vida” for 17 minutes? Not so much.

Hand prefers simpler songs, simpler pleasures. A good crowd, free beer, and fifteen bucks in gas money feels like a good night. “Sometimes it does,” he says. The other stuff — the hype, the outsized expectations, the “show business” end of the music business — stand in contrast to the down-to-earth humility of a man who already says he feels “blessed.”

“(The actor) Dennis Quaid asked me one time whether I wanted to come to New York and do a play about Hank Williams and I said no,” says Hand. Quaid, he adds, then queried how much money might it take to get Hand there? “I said I don’t know. How much do you think a soul might be worth? And he said, ‘You know, you might be right. I followed Jerry Lee Lewis around for three years (Quaid portrayed the legendary early rock ‘n’ roll singer-pianist Lee in the 1989 film, “Great Balls Of Fire!”), and I felt I was going to have to kill him before I got away from him.’ ” 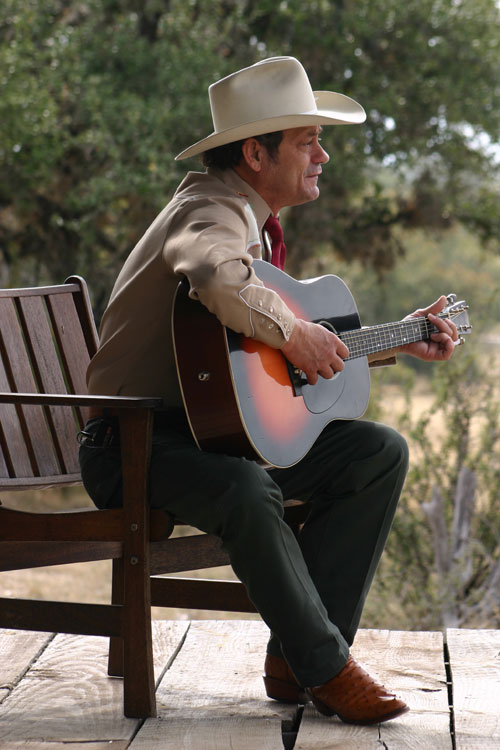