“I’ve got ninety-nine ways to play my guitar / It’s going to pay me before I die” — David Bowie, “Sweet Head,” from The Rise And Fall of Ziggy Stardust And The Spiders From Mars

David Bowie announced he was a Rock Star before he actually became one. Besides being a bold, empowering leap of creative faith and imagination that would foreshadow Bowie’s artistic impulses for five decades, the conceit of creating, and then transforming himself into, his most iconic character, Ziggy Stardust (whose origin-story cast a fledgling singer-songwriter originally named David Jones as an insatiably adored, sexually ambiguous glam rock god) proved a brilliantly prescient, shrewdly strategic move.

Yes, Bowie had made several intriguing-to-excellent records before Ziggy was born: 1969’s “Space Oddity” was the first real glimpse that revealed to the public the worlds and identities that the 22-year-old Bowie was capable of conjuring. And in my view, Ziggy’s immediate predecessor, “Hunky Dory,” released in 1971 (and whose music is the subject of the link to my essay concerning the circumstances and sessions for that album below), was actually the first in what would be a string of classics that defined David’s golden age of music-and myth-making. 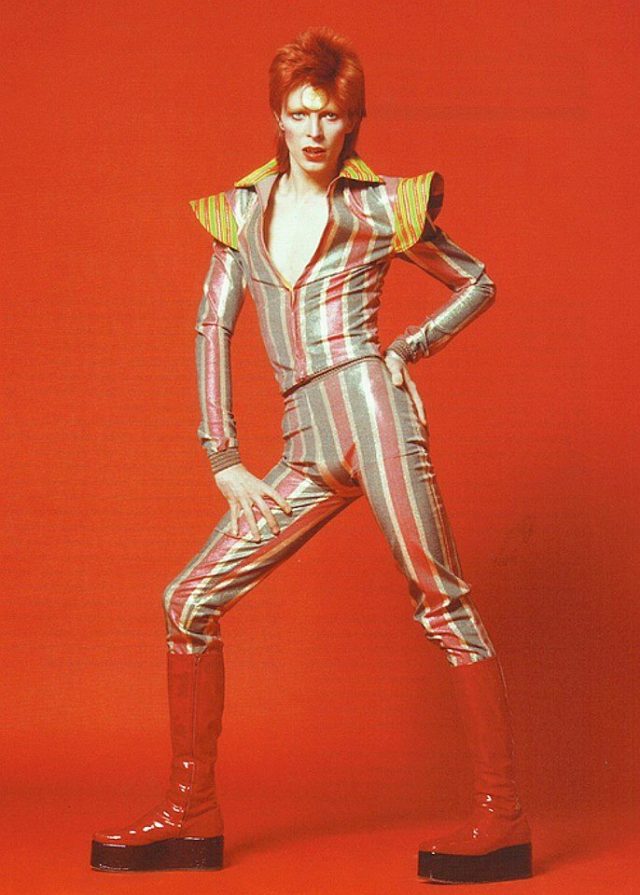 But the public’s first and foremost fascination (and titillation) was with that fabricated androgynous Ziggy personae, which, among other things, provoked questions of where Bowie the man ended and Ziggy the muse began; and whether such distinctions even mattered in an entertainment world built on the precepts of fantasy, image, escape, and artifice.

Whether he liked it or not, Ziggy remains Bowie’s most indelible image among many. And David’s actions as far back as 1973 suggest he knew the enduring power of what his imagination had unleashed. Unlike the shallow, hyper-image conscious and celebrity-centric times we live in now, where reality show “stars” endlessly rehash and recycle their one idea (or more likely, their handlers’ one idea) dry, Bowie almost immediately set about dismantling his creation and going to great lengths to distance himself from it and start anew.

Perhaps he was worried about being typecast or being forever doomed to reprise an identity-blurring role that soon eclipsed (and perhaps even overshadowed) Bowie’s own long-term ambitions. So barely a year after he birthed it, the artist (in)famously decided to kill off his Ziggy personae in favor of brazen new guises such as Aladdin Sane, The Thin White Duke, and eventually, that of David Bowie, multi-talented artist and multi-platform explorer whose art was ultimately a synthesis of himself.

There were exhilarating forays into crisply cool Philly-style soul (1975’s “Young Americans”); brooding German art-rock (a dark trio of late ’70s albums usually referred to as his “Berlin” period and recorded with producer Brian Eno); sumptuously polished dance-floor pop (1983’s “Let’s Dance,” recorded with producer Nile Rodgers); and drum ‘n’ bass-influenced electronica (1997’s “Earthling”), just to name a few strains and styles of sound that were the products of Bowie’s musically omnivorous, ear-to-the-ground approach. And what didn’t directly inspire him to expand upon or adapt for his own means, he created outright.

But as a true game-changing moment, Bowie’s invention of Ziggy remains one of rock’s all-time ‘genius’ moves that instantly catapulted a waifish, cabaret-folk dandy into a full-blown rock  and roll deity. Beyond all the amazing music, Ziggy gave Bowie the gift of a global platform with which he could freely pursue and explore his considerable creative ideas and ideals, even if and when the subsequent commercial payoffs dwindled (as they typically do for long-term career artists).  To his credit, the mixed reviews and lukewarm reactions that dogged some of his late ’80s and early ’90s work didn’t seem to deter David from continuing to follow his muse wherever it chose to go, just as always.

Besides writing and recording more than two dozen albums across the better part of five decades (which, until 2013, had also included a decade-long “retirement” from releasing new music), he also single-handedly reinvigorated the fading (or non-existent) careers of a pair of artists who were friends and personal favorites.  He wrote and produced (AND sang backup vocals on) the anthemic “All The Young Dudes” for singer Ian Hunter and Mott The Hoople, who were gasping their last breaths as a band when Bowie rescued them.  That immediate hit and radio evergreen gave Mott their first taste of commercial success.

Next, he pulled Iggy Pop from the trash heap of musical footnote has-beens — twice! — first by talking the suits into giving Pop, himself a mercurial original and innovator, another chance at a recording career. When they said yes, he produced the ferocious 1973 comeback album, “Raw Power,” which Iggy  recorded with his reconstituted Ann Arbor, Michigan band, The Stooges. Though it did not set the pop charts on fire (only the ears of listeners and anybody brave enough to witness the Stooges’ maelstrom live), the LP became nothing less than an acknowledged blueprint for the punk movement that would explode the rock status quo within a few short years. Bowie would also most famously work closely with Pop on what would come to be regarded as the latter’s two finest, and most commercially successful, solo efforts: “The Idiot” and “Lust For Life,” both released in the same year of 1977.

Besides a prolific amount of music, the post-Ziggy years also brought typically daring, chameleon-like acting turns on stage and screen, in film, and on television — including a memorably hilarious guest cameo playing a glibly callous version of himself on the comedian Ricky Gervais’s comedy series, “Extras” a few years back. Non-essential though it may be to the rich, marvelously variegated narrative of Bowie’s life and career, I feel compelled to mention it here because, on particularly tough days when I can’t shake my mood, I’ve called the clip up and found myself having my usual Pavlov-ian reaction: doubling up in paroxysms of near-blinding laughter and tears at Bowie’s pitch-perfect performance. (And the fact that it is Bowie, and not Gervais, who is the primary cause of my response, says  something about the man’s comedic timing and touch indeed).

The reason for tears is a bit different today. David Bowie, who died Sunday, only two days after his 69th birthday, had reportedly battled cancer for the past 18 months. But the toll of his illness, apparently, did not dim his forward-thinking creative spark. And, incredible as the feat sounds, it did not deter him from working on new music right up until the end and releasing his latest work, “Blackstar,” on his birthday. Longtime producer Tony Visconti called the gesture “a parting gift.” I am listening to it right now as I write this, and its visceral impact has, of course, immediately deepened in the course of just one day.

Ultimately, “Blackstar” is a worthy addition to the Bowie canon. And it’s one which now occupies a sadly significant place as the final statement from a singularly sensational mind; a consummate, multi-faceted artist whose sound and vision helped shape the foundation, fashion, and future of much of popular music of the past forty-plus years.

But Bowie being Bowie, the man’s relevance has never been never relegated to an archaic past or sentimental nostalgia. There always was, and continues to be, a current of bracing immediacy, a hungry urgency for the future, and a vital infusion of the here-and-now coursing through the music.  Take the stirring saxophone-whorl of “Lazarus,” which sounds very different given the circumstances of today, than it did just 36 or 48 hours ago: “Look up here / I’m in heaven / I’ve got scars that can’t be seen / I’ve got drama can’t be stolen / Everybody knows me now … I’ll be free / Just like that bluebird / Ain’t that just like me?”

What better fit for a Flashback Friday Halloween than to examine a pivotal point in the singular career of David Bowie, a man of many masks, guises, and gazes: the doomed astronaut of Space Oddity, messianic rock god alien of Ziggy Stardust, paisley dandy, diamond dog, the cracked actor of  Aladdin Sane, The Lodger, Thin White Duke, jovially taunting foil to Ricky Gervais, and yes, reluctant vampire aesthete in one of the truly magnificent films of the “horror” genre, “The Hunger.” For fans of the man with the screwed down hairdo and his magnificent body of work, here’s my new review essay of a rare “unofficial” release I just penned for the cool site I contribute to, Collectors Music Reviews. You can also find it there (http:wwwcollectorsmusicreviews.com) along with a dozen or so other reviews I’ve  so far posted there under the nom de plume “Leedslungs71.” Hope you get as many…