“RPM” is pausing to reflect on the Centennial of the birth of Willie Dixon, surely the greatest and single most important songwriter of modern blues, as well as an ace bassist-producer-arranger-session man, who would have turned 100 today (after battling diabetes for many years, he died of heart failure at the age of 76 in 1992).

I’m proud to say that Willie Dixon was my first-ever big-time interview of a big-time musician (and personal hero). I was a 21-year-old college student writing for my town’s daily and weekly newspapers,  and I heard that Willie was bringing his band to the famed folk and blues coffeehouse-club, The Iron Horse, in Northampton in  the summer of 1985. And although I really had no idea how to go about it, I remember calling the venue he was to appear at to get the ball rolling and request a conversation with this most prolific architect of post-war Chicago blues. Here was a man whose name was listed in the credits of so many American and British blues records I owned (with the exception of Led Zeppelin’s, initially at least  … see the Interwebs for the sordid details of this well-trod ground).

When I finally snagged an interview, called the number given to me, and a lived-in voice as earthy and rough as soil mixed with ground gravel answered on the other end of the line, I felt as though I was living in a hot, humid dream rather than sitting hunkered over a telephone cradle and cord in the stifling attic of my parents’ bedroom. “The blues is the roots of all American music,” Dixon would tell me during the course of our 30-minute conversation, stating a belief he would repeat many times over the years. “And the other musics are the fruits.”

I was introduced to Willie after his relaxed, gregarious show that summer. He was seated backstage like a king-sized caretaker of the blues; a suited and suspendered, bowler hatted ambassador for the lore and legend of this music. Just sitting there on a sofa, with one large palm resting comfortably on top of his cane (and stand-up bass nearby), Willie seemed to be situated squarely front and center of everything (at least that’s how I saw him), effortlessly embodying and inhabiting the rich history he helped create. He was gracious, good-humored, friendly, and chuckled deeply — though he looked a little taken aback at shaking hands with this clean-cut white kid from Massachusetts who had asked all those questions about Chess Records and Muddy Waters — and looked, admittedly, closer to 16 than 21. My mouth suddenly as dry as a bone, I was also shaking like a leaf, on the inside at least, which may have had something to do with him grinning so readily. But I’m reasonably sure I wasn’t the first version of me he had encountered over the years. 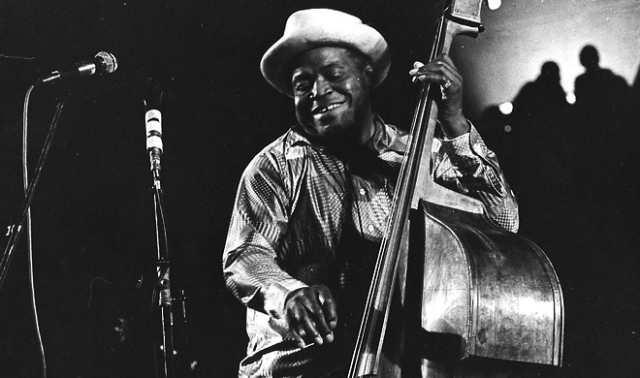 There is a lot to the epic story of Willie Dixon’s epic life, good, bad, and ugly — but even the latter translated into something that became an ultimate good: Dixon’s Blues Heaven Foundation, which took shape in the 1980s and dedicated itself to not just preserving the music of this quintessentially American art form, but pursuing copyrights and publishing royalties owed to artists and songwriters for work that was all too often appropriated, exploited, or stolen outright.

Finally, for a little perspective about this man’s contributions to music, on the occasion of his birth on July 1, 1915 in Vicksburg, Mississippi, here’s a short list of the songs he wrote for artists and peers (including Muddy Waters and Howlin’ Wolf), and in many cases, also played bass and/or sang on: “Little Red Rooster”; “Spoonful”; “I Can’t Quit You Baby”; “Hoochie Coochie Man”; “I Ain’t Superstitious”; “You Shook Me” (co-written with J.B. Lenoir); “Back Door Man”; “You Need Love”; “My Babe”; “I Just Want To Make Love To You”; “The Seventh Son” “The Same Thing”.

Each of these songs has, over time, become a beloved standard of the blues canon, having been recorded and covered by the likes of the aforementioned Waters and Wolf, but also by the Rolling Stones, the Yardbirds, Jeff Beck, Jimi Hendrix, Small Faces, Cream, Led Zeppelin, the Doors, Grateful Dead, among many others. Each of these songs sound like planets unto themselves, possessing worlds and works of poetry, myth, magic, humor, pathos, immediacy, timelessness. And Willie wrote them all, each and every one. In a sense, Willie Dixon was the Big Bang of the modern universe of blues.  Now you know why a 21-year-old blues fanatic was quaking in his Pumas. Wouldn’t you if you met a Creator of the Cosmos?

My friend, Blues scholar and musician Ted Drozdowksi, has put together this kick-ass list, so check it out y’all!

← Damn Right, It’s Buddy Guy: Still “Stone Crazy” After All These Years
A Banquet of Butterflies for Brian, and the Dawn of the Midnight Rambler →