WHO’S NEXT? NOBODY COMES CLOSE: Reflections On Listening To Who At 50, And Their Rock Masterpiece (No, It’s Not Tommy)

The sound of a jet taking off? Nope, it’s just The Who in full flight.

Just a quick one — pun intended — to honor one of my all-time favorite artists, The Who, to mark their “Who Hits 50!” world tour that lead singer Roger Daltrey has summed up as “one long goodbye.” Of course, we’ve all heard that promise/threat from the ‘Orrible ‘Oo” a few times and decades before, and I’ve always had misgivings about the band soldiering on even as drummer Keith Moon and bassist John Entwistle — two absolutely crucial and irreplaceable, pieces of the Who’s dynamic sound puzzle — fell away in 1978 and 2002, respectively.

Let’s face it. Cranking up the lucrative touring machine year in and year out is one thing. Producing compelling new music is another. And one middling new album in 30 years is certainly a far, far cry from the prolific flurry of epochal works songwriter-guitarist Pete Townshend and the Who put before the public during their first ten years together.  The group’s seminal  four-year 1969-73 run between “Tommy” and “Quadrophenia,” I would argue, produced albums as essential to the rock canon as any four-year run of the golden era, whether it be the Stones (’68-’72), Zeppelin (’69-’73), Dylan (’63-’67), Neil Young (’68-’72), or the Beatles (’65-’69).  But, as with most of those aforementioned artists, those salad days are long gone (oh hush, you Dylan proselytizers piping up in the back; I know there’s ’75’s “Blood On The Tracks” — still Bob’s best work since ’66’s “Blonde On Blonde” — but no genuine masterpieces and precious few outstanding albums). 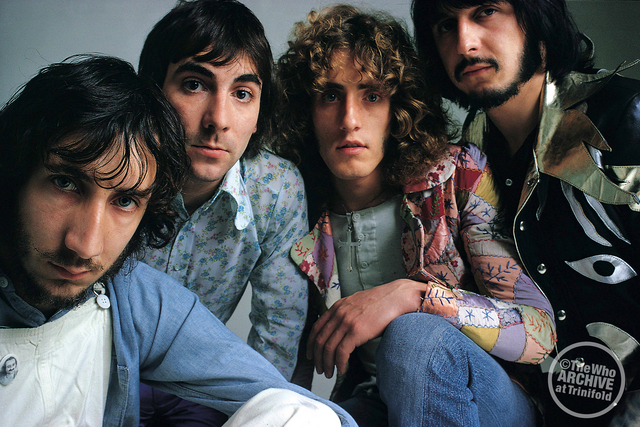 The four-headed hydra: The Who circa 1971 and “Who’s Next.” Photo courtesy of the Who’s official website (you should visit) http://www.thewho.com.

But be that as it may, I would concede that in all the years I’ve seen, reviewed, and written about the Who on stage — or what passes for the Who these days —  the band has always put in a maximum effort and delivered the best Who product possible. Even if that product is now bought and sold as a nostalgic summoning of the good old days, rather than the bracing delivery of a state-of-the-Who-union.

Yes, there have been some truly transcendent musical moments that harked back to what I suspect an entire concert in the old days felt and sounded like. And I, like many others, have gratefully accepted and devoured those moments and understood that, pragmatically and realistically speaking, the Who could never be as it once was. Nothing can.

Hardcore Who fans and followers are nothing if not loyal listeners and guardians of not merely the music, but the idea of the band as well, and I certainly count myself among those fans. Maybe that is part of the reason for the mixed feelings I have when I hear they’re heading out on the road. Again. Theirs is a brilliant, bold legacy that is worth cherishing and protecting. And, not that anybody’s listening, but I wonder if their Mount Rushmore of Rock gets chipped and tarnished just ever so slightly with every new increasingly diluted (deluded?) roll out. The notion makes me cringe just a little.

To mark and honor the Who’s legacy, I would much rather talk about — and listen to — the band in their prime. When I do this, the spirit and vitality of my own prime (real or imagined) feels close at hand, rather than what I feel at a Who concert these days, which is a wistful ache and the sense that we’re collectively paying homage to what once was, rather than what is. Oddly enough, a slab of 43-year-old vinyl feels like fresher currency to me. And probably more than any other Who album — my favorite, the richly layered “Quadrophenia,” really demands an extended, immersive experience for full effect– when I need a revitalizing, exhilarating jolt, I reach for 1971’s “Who’s Next,” an LP that has inspired, sustained, and nourished me for more than 30 years now.
Like “Tommy” before it and “Quadrophenia” after, the work itself was originally intended to be another conceptual double album linked by  Townshend’s ivision (loosely interpreted here) of a  magical life force/musical note and cosmic wavelength  connecting and unifying the universe  as one.  As with most of his best works, the music of “Lifehouse,” as the project was initially known, explored recurring themes of seeking spiritual enlightenment; connecting to/with a greater community (read: humanity); and, as “Pure and Easy,” a song written for “Lifehouse” describes it, finding “the secret note in us all.” Alas, after much experimentation — including booking live dates at London’s experimentally minded Young Vic Theatre, where he invited audiences to hear the new music that, good as it was, was fast unspooling into an open-ended, free-form musical exploration with no end in sight — a frustrated Pete reluctantly settled for boiling the best music hatched from his idea down into one single record. Which turned out to be, of course, merely one of the landmark albums of the rock era.
Nearly every track is a stone classic  (“Baba O’Riley,” “Bargain,” “Behind Blue Eyes,” “Won’t Get Fooled Again,” “Goin’ Mobile,” “Love Ain’t For Keeping” etc.) — and, come to think of it, so is every aspect of its creation and execution, from the songwriting to the band’s individual and collective performances to the incomparable production with engineer Glyn Johns at the helm. The thing is absolutely crystal clear and, to crib a lyric from “Join Together,” a song written around the same time, the band sounds “as deep as it is wide.”  By contrast, most rock records made in 1971  sound like they were made in 1971, with some notable, landmark exceptions such as the Stones’ “Sticky Fingers,” Led Zep’s “IV,” Carole King’s “Tapestry,” T. Rex’s “Electric Warrior,” David Bowie’s “Hunky Dory,”and pretty much anything Pink Floyd touched. But much of the self-consciously heavy rock of the day can sound thick, murky, turgid, bombastic. Not so “Who’s Next.” It glitters like a bright, brilliant diamond, but also refracts sharply kaleidoscopic prisms of light and suggests different depths of mood and personality. Anger, joy, yearning, contentment, wanderlust: it’s all there and, as another non-album song, “Naked Eye,” says, “it’s all connected to the brain.” The brain being  Townshend’s, of course, as it resided inside the burly beast of the Who.

Even the inevitable reissues over the years, fleshed out with bonus tracks, era-appropriate singles and B-sides, and outtakes, have never detracted from the original self-contained, stand-alone slab of perfection  of “Who’s Next”(much like that standing monolith in the slag heap the members of  The Who pretended to piss on). For those of us familiar with the aborted “Lifehouse” project and fond of wondering what might have been, all of the extra music, text, and context that has graced “Who’s Next” over the years has been a welcome augmentation to the original LP release — but not, it turns out, a necessary addition.

Behind The Birdman’s Blue Eyes: Rare show poster from the Boston Tea Party 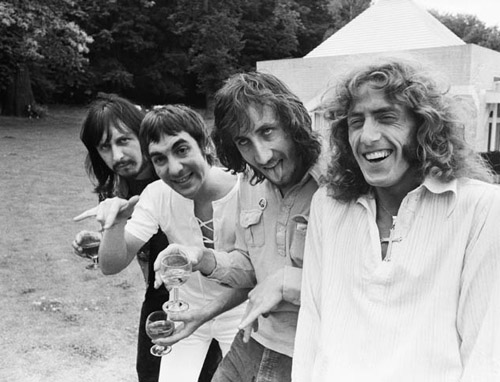 Really? We blew out THAT many eardrums?

As befitted the album, the Who’s juggernaut tour(s) during this period were epic events from a creative, musical, and performance standpoint. Regrettably, as I mentioned, I was too young to have seen them in the flesh back then. (And there are few working artists I can say that about these days). But from the treasure trove of rare live recordings and concert footage I’ve seen and heard over the years, both official and unofficial, a convincing case can be made that the Who were basically sonically untouchable on stage during those ’69-’73 live years.

Only the Stones, Zep, and possibly Bowie seem comparable as a larger-than-life live act during the same period, although artistic lessers of the day like Alice Cooper, Deep Purple, and, uh, Grand Funk  Railroad certainly had their fan bases.

Pound-for-pound, element-for-element, they really may have indeed been the best live rock band in the world at the time — a “four-headed hydra” as I’ve described them in pieces and reviews I’ve written about them over the years (a few pieces can be found elsewhere at this blog).
And while the epochal “Live At Leeds” certainly can make a claim for that accolade, for the sheer magnitude of material, for top-notch performances both individual and collective, and for bold, blazing presentation — it’s hard to beat “Who’s Next.”
Besides the qualities I’ve already mentioned, the album featured Townshend’s first use of synthesizers as a kind of sonic and sound collage experiment, and while Daltrey initially loathed the idea, it’s impossible to imagine tracks such as “Baba O’Riley” and “Won’t Get Fooled Again” without those distinct signatures. Which, by the way, were apparently not just electronically looped and and/or sampled, but rather programmed and then played continuously by Pete.
Then there’s the trivial (or not so trivial) tidbit concerning the matter of the electric guitar Townshend used to make “Who’s Next”: a 1959 Gretsch Chet Atkins “Country Gentleman” model (along with amplifier etc.) that had been gifted to him not long before by his friend Joe Walsh, singer-guitarist for the late ’60s/early ’70s American band the James Gang.
Walsh had wanted tor return the favor of Pete having presented him earlier with a cutting-edge synthesizer, after the two young men had hit it off.  Townshend has been quoted as saying that when he first opened the guitar case and saw the big, bulky “orange” guitar, he hated it on sight. Then he plugged it in and tried it out.
Although he’s used the instrument sparingly on stage because of its propensity to fall out of tune (I’m sure all those windmills didn’t help matters), Pete has claimed over the years that it proved to be the best and loudest guitar he ever had. Strangely, while he’s most closely identified with a couple of other electric guitars — Rickenbackers in the early days; Gibson SG’s during the prime early ’70s touring years; and of course, Gibson Les Pauls — we owe the six-stringed magnificence of “Who’s Next,” and the bulk of just about every other Who recording that came after, to two country gentlemen named Chet and Joe.
Listen to an early live version of “Behind Blue Eyes,” from the seminal “Who’s Next” album, performed in San Francisco here: https://www.youtube.com/watch?v=CCkeiBZl2W0&feature=share
Hear a selection of studio and live sessions for the “Lifehouse” album that subsequently became “Who’s Next” in abbreviated form: http://www.youtube.com/watch?v=IxfZS1kgnAo
For those of you who have to have — and hear — it all, this link should bring you to the first of a four-part series on the complete “Lifehouse” sessions and Pete demos (Townshend’s solo demo for a very different  primordial version of “Baba O’Riley”  titled “Teenage Wasteland” is especially illuminating for how different it is):http://www.youtube.com/watch?v=hxp7R31yl8M&list=PLI1fn2Am2D08vRtBXaLwB7IBL4_XRKRfP
The complete, uncut performances and segments of the Who on “The Smothers Brothers Comedy Hour” back in ’67: http://www.youtube.com/watch?v=FYkGimCrcRg&feature=share
All Who alla time (plus new tour dates) here! http://www.thewho.com More on the genesis, execution, and reception of “Who’s Next” here: http://en.wikipedia.org/wiki/Who’s_Next

Where does the fringe end and Roger begin?

A baseball publication that resigns to the awkwardness of life and the 8-1 putout...Stay in Oakland! (cococrispafro@gmail.com)