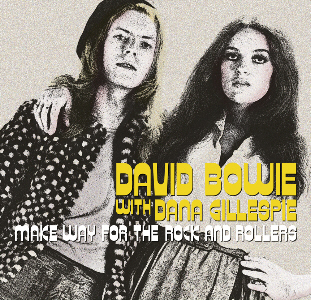 What better fit for a Flashback Friday Halloween than to examine a pivotal point in the singular career of David Bowie, a man of many masks, guises, and gazes: the doomed astronaut of Space Oddity, messianic rock god alien of Ziggy Stardust, paisley dandy, diamond dog, the cracked actor of  Aladdin Sane, The Lodger, Thin White Duke, jovially taunting foil to Ricky Gervais, and yes, reluctant vampire aesthete in one of the truly magnificent films of the “horror” genre, “The Hunger.” For fans of the man with the screwed down hairdo and his magnificent body of work, here’s my new review essay of a rare “unofficial” release I just penned for the cool site I contribute to, Collectors Music Reviews. You can also find it there (http:wwwcollectorsmusicreviews.com) along with a dozen or so other reviews I’ve  so far posted there under the nom de plume “Leedslungs71.” Hope you get as many treats as you do tricks (but sometimes the latter can be just as fun, depending on the company), and have a great weekend! Hope to hear from you.

Everything Hunky Dory up there? Bowie looks to the sky to see if Major Tom is still floating in space with his protein pills.

David Bowie With Dana Gillespie – Make Way For The Rock And Rollers (The Godfatherrecords G.R. 953)Recorded at Trident Studios, London, 1971

It’s all but impossible to remember a time when anyone had to introduce David Bowie. But back in the summer of 1971 – a year before Bowie’s breakthrough album, “The Rise and Fall of Ziggy Stardust and the Spiders From Mars” would catapult him to worldwide fame and forever change the thing people thought of when someone mentioned “Bowie” (no, it’s not just a hunting knife) – his manager went to work promoting this scuffling, relatively unknown talent.

That manager, Tony DeFries, knew he had something special on his hands in the soon-to-be-issued “Hunky Dory,” the LP that would precede “Ziggy” by a mere six months (in those heady days, Bowie’s early albums proliferated nearly as quickly as Dylan and Beatles’ LPs had the previous decade). He was also prepping for the release of another one of his Mainman management company’s new artists, a promising young singer-actress named Dana Gillespie, whose 1973 debut would be co-produced by Bowie and his guitarist Mick Ronson. 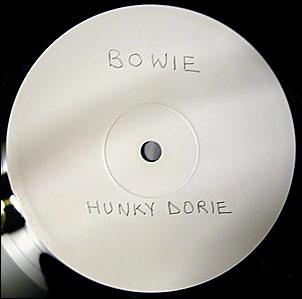 White Label for a White Duke: The bare-bones promo for “BOWPROMO1” (note alternate spelling of “Dorie”). 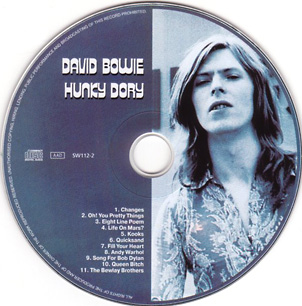 As was the order of the day back then, DeFries decided to maximize the collective crossover potential of his two clients by pressing up a reported 500 promotional LPs to be sent to press and radio station programmers (a Holy Grail long referred to by collectors as “BOWPROMO1″ after the etchings in the LP’s inner run-off groove). Although Bowie’s career, as we all know, blasted off like Major Tom’s rocket ship, Gillespie’s equally stylistically diverse debut, titled “Weren’t Born A Man,” would prove far less successful (despite the rather randy LP cover art of a fetching Dana in a boudoir-ready lingerie get-up that while musically misleading – there were no striptease numbers, for instance – left little doubt that she was indeed very much of the female persuasion, as her album’s title indicated). Gillespie would eventually transition to a successful and varied acting and recording career, appearing in British stage adaptions of the Who’s “Tommy” (playing The Acid Queen) and “Jesus Christ Superstar” (as Mary Magdalene, no less – talk about range). And, having eventually turned to the blues as her genre of choice, she’s rarely stopped singing and recording scores of albums over the past 45 years.

David and Dana get ready for their close-up, publicity photo session, summer 1971.

That said, “Make Way For The Rock And Rollers,” this new Godfather release credited to David Bowie with Dana Gillespie, and featuring a nice “Hunky Dory”-era cover portrait of the two artists, is likely to be mainly of historical interest to Bowie collectors and completists not in possession of one of those elusive and expensive 500 promo LPs. The package is a pristine audio reproduction of that long-ago DeFries promo, presented in typically lavish Godfather fashion, both audio and visual. The recordings come housed in a sumptuous tri-fold cardboard cover jacket with an array of slightly color tinted “Hunky Dory” photo session publicity stills of a long-locked Bowie — a far cry from the plain LP sleeve that housed, and white labels that adorned ,the original promotional album. (Alas, unfortunately save for the front cover and a modest insert booklet featuring a longer-pan shot of the front cover, there are no other publicity shots of the equally photogenic Gillespie to be had, boudoir or otherwise. A pity, that).

The bulk of “Rock and Rollers,” mostly recorded at London’s Trident Studios in 1971, belong to Bowie, although Gillespie does get five tracks to herself, including a crisply magnetic cover of Bowie’s (and Bowie/Ronson-produced) “Andy Warhol,” which Bowie reportedly originally wrote for her. She also delivers an expressively poignant vocal on “Never Knew,” which happens to be one of the finest tacks here and wouldn’t sound out of place on an early ‘70s Laura Nyro, Sandy Denny, or Joni Mitchell album. Likewise, the Grace Slick-Ian pop-rock of “All Cut Up On You” demonstrates Gillespie’s self-assured strengths as a vocalist seemingly as capable of as many stylistic permutations in her way as Bowie was in his. Small wonder she later proved herself so adroit in live musical theater.

But back to Bowie. Curiously and incredibly, the promo did/does not include “Changes,” Bowie’s biggest hit from “Hunky Dory” and one of the defining songs of his illustrious career. It does, however, include “It Ain’t Easy,” a terrific track that would not appear until the follow-up “Ziggy Stardust” record six months later.  Although this track is the same version that would appear on  “Ziggy,” the remaining Bowie selections all feature different, early mixes from the album proper. Some of the differences are subtle and fairly nominal: Fadeout times, instrumental emphases, or a dollop of echo added or subtracted (no reverb on Bowie’s vocals on the promo version of “Queen Bitch,” but some reverb added to Ronson’s guitar part, for instance). Other disparities are more dramatic: We get an entirely different vocal take on “Eight Line Poem,” for example, with the echo effect also removed on the word “collision” in the lyrics. (For a detailed track-by-track breakdown, this site proved very helpful and useful: http://www.illustrated-db-discography.nl/bowpromo.htm). All are presented here in superb stereo sound quality, but there is no mention in Godfather’s liner notes where and how this was sourced. We’re guessing either the original master tapes (yes, it sounds that good), or a pristine copy of the promo (if the latter is the case, a big thank you to whomever lent out their copy for this release). 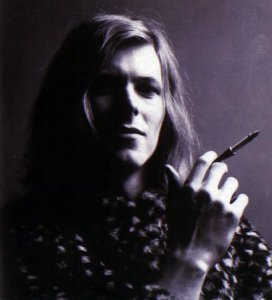 Debonair David (did we ever have any doubt?) strikes a pose circa “Hunky Dory,” 1971.

Whether hearing these rare versions or the officially released tracks, this material makes a convincing case for “Hunky Dory” as much more than merely the promising predecessor to its far more famous, orange-maned counterpart. While “Hunky Dory” may have lacked the calculated genius of the all-encompassing, yet marvelously self-contained image that Bowie projected, promoted, and cultivated with “Ziggy,” the album is every bit its musical equal. Just try to imagine the impact of what it must have felt like for a radio programmer, say, to hear songs like “Queen Bitch” (reportedly written about, and upon meeting, Lou Reed in New York) or “Oh! You Pretty Things” for the first time. Even now, forty-plus years on, their brash immediacy and subversive pop sophistication is striking.

Godfather’s title also tacks on five studio outtakes, also from the same year: 1971’s sessions for the ultimately aborted “Shadow Man” project that never saw the light of day once Bowie hit upon his “Ziggy” concept/personae. (Bowie did re-record a new version of “Shadow Man” in 2000 for an also aborted album that was to be titled “Toy”; that remade version later surfaced as B-side to the 2002 singles “Slow Burn” and “Everyone Says ‘Hi’”). Though these demos are presented in lesser quality than the promo proper’s tracks, and with a smidgeon of acetate-like hiss, they make for a nice period-accurate bonus. Taken together, this handful of tracks offers the listener a prime example of what Bowie’s demos sounded like at the time, when he was still shaking off the last vestiges of his florid but floundering baroque folk-pop period and searching for a fresh voice.

Bowie collectors may have previously come across this non-earth-shattering fare – the Manfred Mann/”Quinn The Eskimo”-soundalike, “Looking For A Friend”; the Move-ish “Rupert The Riley”; or the muted and unremarkable “Shadow Man” – on various earlier unofficial releases. But in its own way, the somewhat lackluster music nevertheless paints a dramatic portrait that illustrates just how creatively far Bowie was able to come in such a staggeringly brief amount of time. The relative ordinariness of the “Shadow Man” material stands in stark contrast to the brilliant creative watershed to come, when “Hunky Dory,” “Ziggy Stardust,” and “Aladdin Sane” were all written, recorded, and released within an amazing two years of each other.

In an interview nearly 30 years later, Bowie took note of that pivotal period in his life, when anything and everything seemed possible for this marvelously chameleon-like artist of many guises and gazes.“Hunky Dory gave me a fabulous groundswell,” Bowie recalled in an interview with “Uncut” magazine in 1999. “I guess it provided me, for the first time in my life, with an actual audience – I mean, people actually coming up to me and saying, ‘Good album, good songs.’ That hadn’t happened to me before. It was like, ‘Ah, I’m getting it, I’m finding my feet. I’m starting to communicate what I want to do.”

A great Bowie history/discography resource here that helped with my research into these promo mixes. Well worth a look around: http://www.illustrated-db-discography.nl/bowpromo.htm

Guess the price of these once-free promos went up (if you are or were a radio station DJ or member of the press back in the bad old days of the ’70s, and you’ve held onto yours, now might be a good time to re-finance your house, take that decadent vacation you’ve always dreamed of,  or buy that motorcycle and take that cross-country trip you’re always talking about). Interesting tie-in story here: http://ultimateclassicrock.com/david-bowies-hunky-dory-vinyl-nets-over-10k-on-ebay/

“Queen Bitch” on the BBC with Bowie on the telly right here: http://www.youtube.com/watch?v=Ljv8xCt4Bq8

Watch and hear “Oh! You Pretty Things” with Bowie on the BBC here: http://www.youtube.com/watch?v=bnXZ3R3OWpg

← TIME CAPSULE: On Matthew Sweet (But Not His ‘Girlfriend’) Hitting The Half-Century Mark
WHAT WOULD A VINYL JUNKIE DO? Music, Morals, And Nick Hornby’s High Fidelity Dilemma →