Chris Bell in a publicity shot (and picture sleeve image) for his lone solo 45-rpm single, “I Am The Cosmos,” released in 1978. Chris would die in a single car crash on Dec. 27 of that year.

Speaking (as I so often do here) about great musicians and music, I’d like to take a moment to remember and honor Christopher Bell, the co-founding singer-songwriter of the seminal 1970s outfit Big Star. Although in the years since the band’s initial demise and subsequent discovery by new generations of listeners, much of the credit and attention has been lavished (and rightly so) on mercurial singer-songwriter Alex Chilton, Bell — the quieter, Omega-to-Alex’s-Alpha — was absolutely instrumental in the formation of Big Star and its ascendancy in the hearts and minds of those who heard them.

Chris at Ardent Studio, working on trying to make #1 Record a Number One record (it would attain that mental chart position for many of us who heard it).

Although overshadowed and somewhat marginalized in revisionist histories more interested in mapping out a hagiography of Chilton’s life and career, it is important to remember and celebrate the fact that Bell was absolutely and in every way an equal catalyst and creative partner when it came to crafting the band’s transcendent and magical debut, “#1 Record.”

Unfortunately, haunted by personal demons, depression, and crippled by issues surrounding his religious faith and sexual identity (not to mention clashes with Chilton), Bell left Big Star after its first album and seemingly vanished.

Tragically, Chris died in a one-car crash Dec. 27, 1978 at the all-too-cursed rock & roll age of 27. He had recently gotten back on his feet and had just released his solo debut single, “I Am The Cosmos,” (backed with “You and Your Sister”) and even had his once-estranged partner and foil Chilton contribute vocals and instrumentation. (It took many years, but I finally landed a prized original copy of this insanely rare 45-rpm single this year). 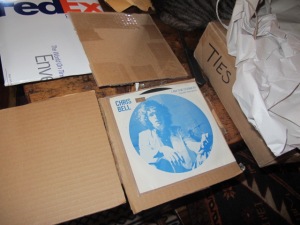 Sadly, Chris never had the chance to release an entire album, but as referenced in the Big Star documentary, “Nothing Can Hurt Me,” when you hear “I Am The Cosmos,” it’s readily apparent where the band got its bright, shining sound on “#1 Record.” 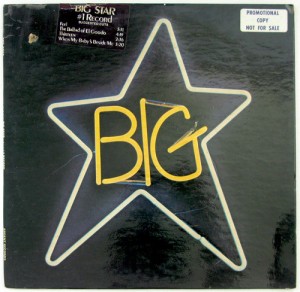 I’ve written that, musically at least, Bell was McCartney to Chilton’s Lennon (although Chris’s dark disposition didn’t appear to be an analog to Paul’s glibly sunny perspective). And just like that famous pair, the alchemy and dovetailing of the two songwriters’ voices made Big Star’s harmonies an otherworldly treat.

Chris also had a distinct voice of his own. Singing solo, it is Chris’s powerful, crystalline tenor that drove the power pop ravers “Don’t Lie To Me,” and “In The Street”  which was later re-recorded by Cheap Trick for “That ’70s Show.” He also wrote “Feel,” “Try Again,” and “My Life Is Right” for the first LP. And Bell’s production prowess could be found in the chrome-like sheen of Big Star’s first album.

Chris (on left) in happier times during a photo shoot to publicize “#1 Record.” Jody Stephens, Andy Hummel, and Alex Chilton (L-R) round out the lineup

Here’s producer John Fry’s assessment, quoted from a Rolling Stone special issue devoted to the greatest albums ever made: “When Chris Bell was still in the band, he took more interest than anybody in the production and technology end of things. He had a good production mind…the reason why the second album is rougher, with fewer harmonies, is due to the absence of Chris’s influence in the studio.”

Although Big Star’s second album, “Radio City,” is often hailed — along with the art-damaged, soul-ravaged “Third” — as the band’s masterwork, I’ve always been inclined to go with “#1 Record” as the Memphis foursome’s definitive statement because of Chris’s taciturn presence and pop chops. There was a push and pull tension between Bell and Chilton that made them even more compelling, and almost certainly better, than each might have been on his own.  (Sound familiar?)

“#1 Record” was also the first Big Star music I heard. And when I did, it shimmered and shone like a brilliant constellation, out of time and space and context of anything else. Because it was like nothing else. Together, Chris, Alex, Jody, and Andy cut a swath across my musical consciousness and exploded my universe in bursting fireworks of melody, hooks, harmony, and youthful hubris befitting a band named Big Star.

All these years later, only Jody remains. But Chris — Big Star’s first shooting star — and Alex and Andy will always be in our midst, as long as their music stays with us. And how could something so beautiful and brilliant not? All we have to do, after all, is listen. And look to the sky, and within ourselves, for those fireworks.

If you’ve got some time to kill, listen to the entire Rykodisc compilation, “I Am The Cosmos” here:http://www.youtube.com/watch?v=c812ojQgtqs

← REVOLUTION AND STREET FIGHTING MEN: The Beatles, Stones, and The (Myth) Making Of Rock’s Greatest Rivalry
WHOLE LOTTA LED: All-Female Lez Zeppelin Bring All Their Love … And Some Serious Chops Too →