A SHALLOW SALUTE: Why The Beatles Were So Much Better Than This (And Dave Grohl)

It’s not that I was surprised, exactly. Disappointed and annoyed is more like it. I knew that a big, gaudy CBS/Grammy salute to the Beatles celebrating the 50th anniversary of the Fab Four’s triumphant U.S. debut on “The Ed Sullivan Show” (on CBS, of course) was bound to be a bit self-serving and showbiz-y. Still, I expected something more. Something better. This is the Beatles we’re talking about, after all. But alas, I should have known better, as somebody once sang.

So what was the low point in Sunday night’s broadcast of the promisingly titled, yet ultimately deflating and depressing “The Beatles: The Night That Changed America — A Grammy Salute”?” Keith Urban and his strategically arranged, fastidiously mussed hair dueting with droop-drawered hacky sacker John Mayer on “Don’t Let Me Down” (which they did)? Ah yes, the Urban Cowboy teamed  with the great style shape-shifter Mayer: He of college mixer affect and clichéd blues “O” face, working sooo hard to be taken seriously as a “bluesman” and trying to make us forget the pandering tripe he once foisted on us with “Your Body Is A Wonderland” and “Daughters.”

Or was it the blown-glass Barbie bauble that was Katy Perry singing “Yesterday” like she was auditioning for a teen queen beauty pageant while neither possessing nor conveying even one iota of the haunting self-doubt or vulnerability found in the song’s lyrics? How about the stupefyingly popular and over-exposed (and over eyebrow-manscaped if you ask me) Adam Levine, whose original claim to fame was churning out pabulum with the dull-as-paste careerists Maroon 5, and whose singing voice was as thin as George Harrison’s knobby kneecaps? (That this guy now gets paid to judge other people’s voices is almost as big a joke as he is, and twice as grim).

Or how about Ed Sheeran, a British dude who sounded like was weaned solely on a diet of Shawn Mullins and Damien Rice, slap-guitar jammin’ “In My Life.”? Or the four limp CSNY wannabees of Imagine Dragons sucking every last measure of relevance and sting out of “Revolution,” one of the Beatles’ most hard-hitting and potent songs (why they needed all those mikes is beyond me, since they barely sounded like one mediocre voice, much less three or four).

None of these people, as far as I could tell or hear, had any discernible musical connection, or specific appreciation for, the Beatles. There is nothing in their respective musical outputs to suggest any music absorbed, lessons learned, or chances taken in the spirit of their supposed idols. Frankly, I’m not convinced that more than a scant few on the star-studded lineup card have even actually listened to a Beatles album front to back, beyond the one or two requisite hits that they may have warbled at a karaoke bar that time they got drunk on Amstel Lights with their buds. There was something hollow and passionless about the whole thing — songs dutifully, professionally learned for the Grammy special, no doubt — but transparently fraudulent nonetheless.

While having the television crew and audience members who were actually there, part of the madness and movement, recall their memories was a nice touch — the most entertaining and historically interesting portion of the program, really — what was up with quoting only fans who had crushes on Paul or Ringo, the two surviving members of the Beatles? That decision felt like a jarring bit of revisionist history, akin to having half the pages of rock & roll’s Book of Genesis torn out, as if those chapters never existed.

Wouldn’t it have been the right (and historically accurate) thing to do to include a sample of the thousands (if not millions) of testimonials from fans around the world who also cherished the bitterly missed, sadly absent John Lennon and George Harrison? Wouldn’t the palpable vacuum left by their precipitously early departure — both taken too soon, one by cancer and one by murder — have been eased or lessened a touch? Wouldn’t their spectral presence, floating and precious yet out of our mortal reach, have been brought a little closer to us amid Sunday’s celebration?

Be that as it may, that wasn’t the night at its lowest or most patience-taxing. For me, the worst element and aspect of the entire program was the inevitable, insufferable Dave Groan, er Grohl, a shameless attention whore and glutton for celebrity of the first order. You (and he) may prefer to call it “paying tribute.” I call it co-opting, and glomming onto, the work of far more famous people.  Never content to stay subtly in the background, there he was, overplaying on the delicately wrenching “While My Guitar Gently Weeps'” like it was all about him; hair flying, arms pummeling like he was working out to Edgar Winter’s “Frankenstein” or Foghat’s “Slow Ride”; eagerly mugging for the cameras; schmoozing every adolescent idol (his and ours) he can buy face time with — and ruining it for the rest of us. Zeppelin reunion? He’s there (why?). Stones 50th anniversary shows? There (again, why?). Paul and Ringo reunion? Yup, there.

The checklist goes on and on and on. And on. Aren’t we as fans entitled to even one or two memories and moments alone with our favorite bands without Dave as part of the package deal? For cryin’ out loud, if Keith Moon and John Entwistle returned from the dead to reunite with Pete and Roger, Grohl would probably show up, swipe Moonie’s drumsticks, and take the drum solo on “Won’t Get Fooled Again.”

What exactly is the endless fascination with this guy? Why all the Grammys and the tens of millions of albums sold and the two hundred and sixty million dollars he’s supposedly got? (No wonder Dave’s always wearing a shit-eating grin and flashing those gleaming white choppers like it’s the best freaking day of his life! It is!). Is it because his music with his main band, Foo Fighters, is so safe, so boringly predictable and blaringly bland that — coupled with his (way in the) past punk/rock bona fides — musically conservative Grammy voters get to cover their asses by feeling “hip” (albeit 20 years too late) instead of not completely out of touch?

But hey, what did we expect from the Grammy brass, who always behave exactly as we think they will. It is all but impossible to underestimate them. Grohl’s grotesquely inflated sense of his own stature and importance, on the other hand, is a more recent and unwelcome phenomenon. Doesn’t the man have any sense of  perspective or proportion (i.e., how much gruel, er Grohl, to add to legendary musical mixtures)? Is he ever the least bit self-conscious about foisting himself on everybody there to watch and listen to someone else? Isn’t there another drummer left in the free world who can handle the gig? Please?

Grohl has gone from being a cool little drummer for a cool, hugely important band (that he did not start or sing or write for; in fact, Grohl was not even Nirvana’s original drummer, so I guess like Ringo, I guess he can relate) to finally becoming a colossally annoying, ubiquitous Zelig. By my count, he’s now beaten Jack White’s record for horning in on other people’s vastly superior legacies. Unlike Jack White, he hasn’t written or recorded much on his own worth listening to. Like fellow 50th tribute guest Jeff Lynne did about 25 years ago with Tom Petty and members of the Beatles, the guy just keeps showing up and pooping in the pool. 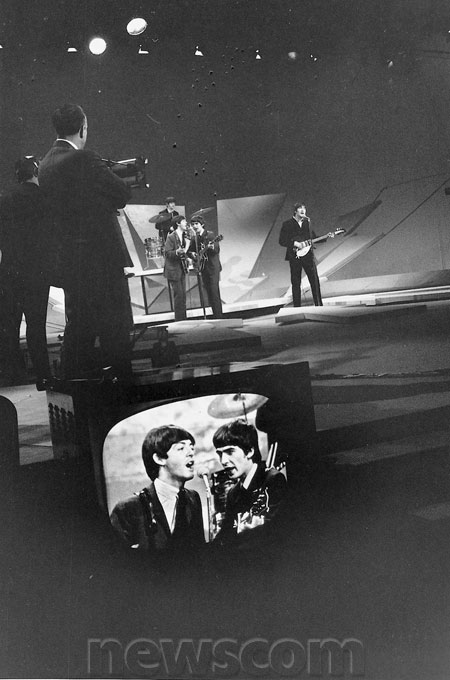 Grohl was just the worst, and most grating, offender of Sunday’s tedious display that was anything but “Beatle-esque.” Unlike almost every “star” performer there, the Fab Four were, first and foremost, about creating great music that mattered. And they were about making the music — not self-promotion or stroking their egos or stoking their carefully cultivated, manufactured images — a priority. 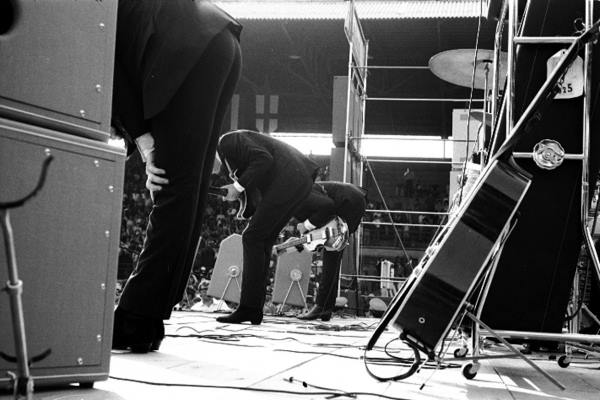 The two surviving Beatles, Paul McCartney and Ringo Starr, offered this reminder by past and present example. Of course, it would be unrealistic and unfair to compare anybody to them — especially that one fateful February night when they stepped onto the stage and into America’s consciousness — that’s why they were The Beatles after all. They were makers of an exuberant, joyous, bracing sound. A bolt of electricity from beyond the realm of anything we had ever known. Seventy million people tuned in to the broadcast that night (astonishingly, more than 60 percent of television-viewing U.S. households). Most never forgot what they saw and heard.

Even discovering the Beatles a decade later as a nine-year-old, years after they had already broken up, I could still feel that energy. It was there in the records I begged my parents to buy me for birthdays, special days (any days) and had devoured obsessively, relentlessly — “Meet The Beatles,” “The Beatles Second Album”; “Beatles ’65”; “Beatles VI” (I had already sequestered and monopolized the “Help” LP we had at our elementary school). And it was there, popping off the movie screen in the burnished, black and white Rolls Royce gleam of  “A Hard Day’s Night,” and in the considerably grainier newsreel footage I would watch rapturously and keep like a giddy secret.

Fifty years later,  in their taped reminiscences with David Letterman in what is now the Ed Sullivan Theater (where Letterman tapes his show), Paul and Ringo (especially Ringo) still conveyed that charm, that sparkle, that vivacity and vitality.  They managed to be simultaneously iconic yet approachable; down-to-earth living legends aware and certainly proud of their profound impact, and the seismic shift in popular music they caused, but smiling warmly with us rather than smarmily at us. 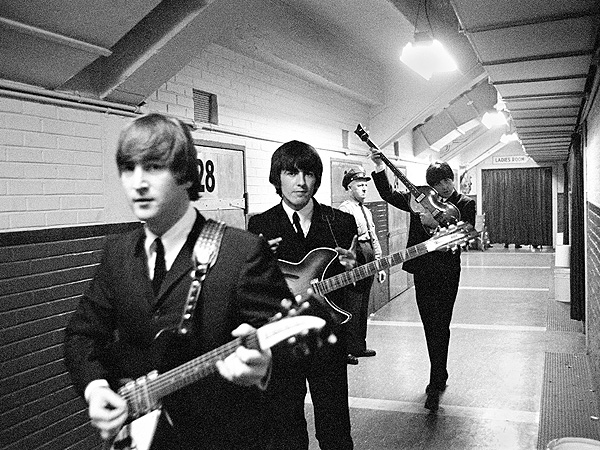 Then they showed us again, separately and together, with surprisingly sprightly run-throughs of “Get Back,” “I Saw Her Standing There” (with Paul’s Little Richard “wooh”s intact), and Ringo’s novelty numbers: “Yellow Submarine,” which summoned its old feel-good communal spirit among the well-heeled, rattle-your-jewelry crowd; Carl Perkins’s jaunty country & western number,”Matchbox”; and the Shirelles’ B-side raver, “Boys.”

There were a few inspired performances, such as Stevie Wonder’s funked-up, pitch-perfect performance of “We Can Work It Out,” and a reunited Eurythmics, whom I thought did a fine job in their typically chilly fashion on “The Fool On The Hill.”  And facing each other at pianos, Alicia Keys and John Legend infused “Let It Be” with the heartfelt gospel spirit at the core of a tune that has always been as much a prayer as a pop song.

But overall, the unimaginative obviousness of the criteria for tapping most of the “artists” who paid tribute ($$$ales, $$$ales, $$$sales) only sharpened the point that this glitzy yet dull Grammy program couldn’t blunt or cheapen, hard as it tried: That there will never be another Beatles, or even anyone remotely like them. Not as long as these are the kinds of high profile contemporary “artists” we trot out as examples of what pop stardom aspires to, and what far too much of pop music has become.

← BEFORE THE DEVIL KNOWS YOU’RE DEAD: Remembering Philip Seymour Hoffman
THE REMAINS OF THE DAY: A Look Back At America’s Great Lost Band →