DECIBELS TO DEFEAT DISEASE: Boston Rocker/Writer Amanda Nichols On How MS Made Her Stronger — And Louder!

DANTE’s INFERNO: Otherwise known as the ever-dapper Gene Dante and the Future Starlets, another band you don’t wanna miss. 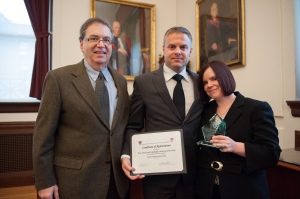 A+ IS FOR AMANDA: Our gal Amanda Nichols receives a community service award for her work with Crash Safely; she’s joined by fellow rocker Gene Dante and Jeffrey S. Flier, Dean of the Faculty of Medicine at Harvard University (he may rock too for all we know!)

BIKE BENEFIT: One of a series of posters made especially for the Crash Safely 2013 benefit shows

Crust For Crash: The deliciously loud, delightfully decorated Upper Crust – otherwise known as Boston’s answer to AC/DC — will be on hand to ring those hell’s bells at Crash Safely (Photo Credit: Mick Murray)

Tsunami of Sound: If their band name alone doesn’t make you wanna check out what’s in store, I don’t know what will!

This time around, the festivities will kick off Sept. 13-14 and then resume the following weekend of Sept. 20-21. In the spirit of this great and worthwhile cause, I’m posting my interview with Amanda and Nick that originally ran in The Boston Globe when they first hatched the cool idea of plugging in and turning up as a way of raising money, awareness of — and yeah, flipping the bird to — MS. What they each had to say — about living, striving, and thriving with MS — spoke volumes about their strength, humor, and perseverance after Amanda was diagnosed in 2008.

Regardless of the circumstances, they’re both witty, smart and thoughtful people to have a conversation with in their own right about any, and all, topics (and I’ve had many music-related ones with Nick, especially, in both official and unofficial capacities). For those of you jonesing for some local live music and reading this within car-shot or T-shot of Boston, I‘ve included all the pertinent details contained in this year’s press release at the bottom of my post. Be sure to check out the who, what, where’s, and when’s (but, er, please don’t skip the story!)

Amanda Nichols remembers waking up one morning in 2003 thinking she had slept badly. “I kind of woke up stiff and sore in a strange way and thought, at first, ‘Gee, I slept wrong in that bed, what did I do?’ ” recalls Nichols, a local music writer and musician who was, at the time, also a nursing student. “And then it didn’t go away and I thought I slept really wrong.”

The stiffness, she says, started creeping up from her feet, to a leg, then to an arm. By the time she had been checked out by a doctor, and then a neurologist a couple of days later, Nichols could barely move. “Getting up and walking around just suddenly became impossible,” she says. “And I had no idea what it was – I felt like I had pinched a nerve. You say, ‘What did I do?’ And the answer was that I did nothing.”

Such is the insidious and potentially devastating nature of multiple sclerosis (MS), a condition defined by the National Multiple Sclerosis Society as “a chronic, often disabling disease that attacks the central nervous system, which is made up of the brain, spinal cord, and optic nerves.” Symptoms can range from numbness in the limbs to paralysis and loss of vision.

Nichols was officially diagnosed in January 2008, after a series of trips to hospital emergency rooms after strange symptoms flared up again in 2007. She was barely 30 years old. “I couldn’t write, I couldn’t type, I couldn’t work, I couldn’t do anything,” she says, over the phone from where she now works at a Harvard Medical School laboratory. “I couldn’t even brush my teeth.”

Thanks to treatment and medication, Nichols is doing a lot more than that these days – and she’s not alone. Roughly 400,000 Americans have MS, while about 200 people are diagnosed every week, according to the National MS Society. Moreover, MS is thought to affect an estimated 2.5 million people worldwide. So far, there is no cure. But Nichols, like so many others, is aiming to change those statistics.

Aided and abetted by a slew of some amazing rock & roll friends, Nichols and her husband, musician and music booking agent Nick Blakey, have begun organizing a series of benefit shows around Boston they’ve dubbed “Crash Safely” (named after a song by Nick’s old garage-punk band, the Takers). The shows are aimed not just at raising funds for MS research but, perhaps more significantly, aimed at eradicating the confusion, secrecy, and stigma that persists around the disease.

“I think a lot of people with MS are still very guarded about what they’ve got,” says Blakey, a bassist  with the Boston noir-punk outfit The In Out.  “But if it’s in the shadows and not out front and center, then you don’t get funding and there’s no cure. It’s your body basically giving you the middle finger. MS is a disease with a very, very black sense of humor. And it can happen to anybody.”

Then there are the limitations imposed, not by the disease, but by other people. Nichols recalls the reception she received after she returned to work following her diagnosis. “The attitude about my ability to do things had shifted dramatically, so I felt very unwelcome when I came back – and that was in a hospital,” Nichols says. “I was walking with a cane sometimes, and I might as well have been a leper. That was shocking to me.”

The slate of bands that have participated in the past have included at least a couple of locally known performers —  Figgs drummer Pete Hayes, and former Shods frontman Kevin Stevenson — who have both made their own struggles with MS public. This year’s bash features some of the cream of Boston rock, including (in addition to those pictured above) 2011 Rock & Roll Rumble winners The John Powhida International Airport; ’70s-style high-octane rockers Township; Boston punk royalty the Titanics; pop avatar Corin Ashley; the Duckbills (featuring members of the long-running New York pop-rockers the Figgs); Lenny Lashley’s Gang of One; the Nickel & Dime Band; and much more.

As for making her own music, Nichols says damage to the ring finger of her right hand, which she calls “a little weird,” has made playing the oboe, her usual instrument, all but impossible. But she’s since taken up the bass guitar. Some days, depending on the weather, the jam sessions at home with Nick work better than others.

“If it’s really humid, then I feel all these little symptoms come back,” she says. “I’ll start dragging a foot behind me, and I’ll think, OK it’s hot out, I have to get back into some air conditioning. Or I’ll be holding a bag, and if I drop the bag I’ll say, ‘OK, it’s gonna rain!’ “

← NOT TO BE TAKEN AWAY: Moon The Loon, Gone Too Soon
THE OTHER “NEW YORK, NEW YORK”: Ryan Adams’ accidental anthem for a stricken city →